Nashville, TN – This week, Soldiers and Airmen of the Tennessee National Guard are taking part in a statewide exercise focused on cyber threats. 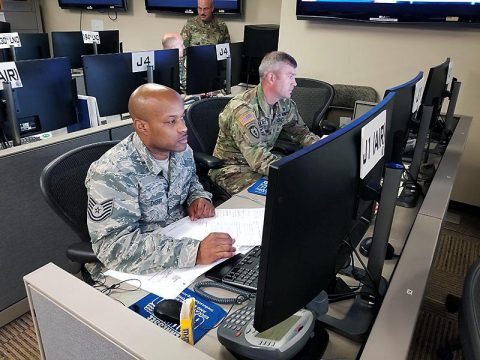 “Interagency coordination during domestic operations is built on relationships, and the Tennessee National Guard works with our state partners throughout these exercises,” stated Brown.

“We are fully invested in responding to disaster events,” he added. “Outreach, training, and exercises are the best way to build key relationships with other agencies and for building mutual trust and understanding.”

Last year exercised a scenario centered on the New Madrid fault erupting in Memphis. This year, the situation is a cyber attack targeting power grids across the state.

“The exercise was developed with TEMA, and is coupled with the Guard’s response to extreme temperatures in the state as well as various civil unrest scenarios,” said Brown.

Part of the “civil unrest” requires the Tennessee Army National Guard’s 168th Military Police Battalion, out of Dyersburg, Tennessee, to team up with the Tennessee Department of Corrections (TDOC) and state parks in Milan.

“The 1/230th Assault Helicopter Battalion, based in Nashville, Tennessee, is also participating with the TDOC portion of the exercise, conducting flights of TDOC and state park personnel from Nashville to Milan, to replicate interagency movement,” said Brown.

The National Guard has a smaller footprint in this year’s exercise due to their largest unit, the 278th Armored Cavalry Regiment, previously scheduled training at Fort Hood, Texas.

“Last year was proof that the adaptive battle staff concept worked with multiple units participating,” explained Brown. “This year, we had to scale it back due to the amount of resources needed to support the training event in Texas.”

TNMAN is critical for interagency relationship building across the state.

“It enables our state partners and ourselves to better understand each other’s capabilities and limitations, making us better equipped to handle real-world situations that occur within the state,” Brown said. “We need to understand how the emergency response effort works at every level; to understand the language, planning factors and how we all operate.”

“Our internal education of the domestic framework will speed our response and ultimately mitigate suffering for our fellow citizens in a time of crisis,” he added. “These are excellent exercises to continue to train and refine the practices of the Tennessee National Guard. They build confidence in our members and competency in domestic response missions.”