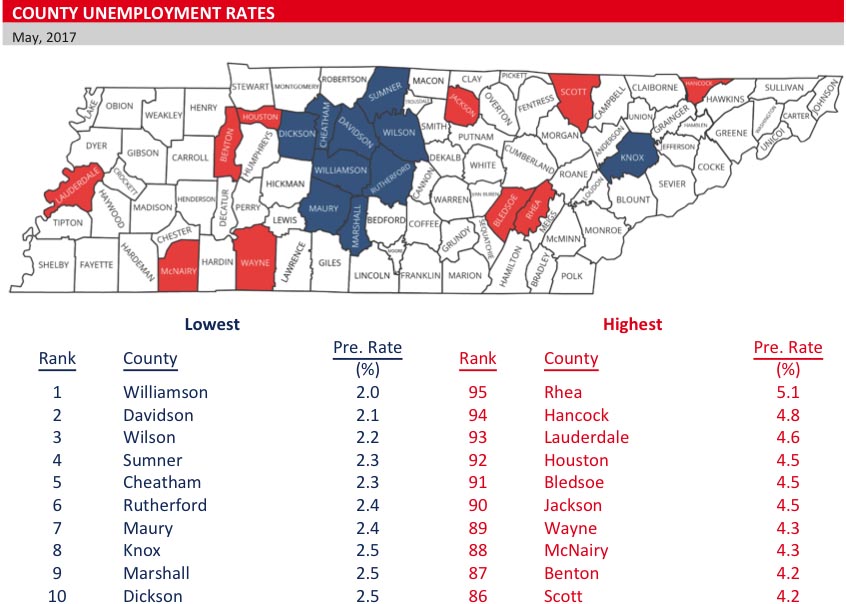 Nashville, TN – Following the lowest state unemployment rate in nearly 20 years, Tennessee’s county unemployment rates for May 2017 have decreased in 94 counties and remained the same in 1, according to data released today by the Tennessee Department of Labor and Workforce Development (TDLWD).

Montgomery County had an unemployment rate of 3.2 percent in May. Which is down from April’s 4.1 percent. 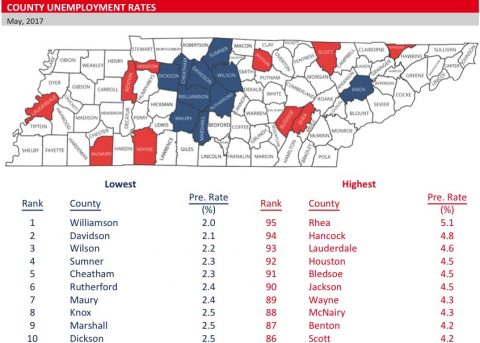 Davidson County has the state’s lowest major metropolitan rate at 2.1 percent, a decline from 2.7 percent during the prior month.

Hamilton County declined from its previous month’s rate of 3.6 to 2.9 percent while Shelby County has an unemployment rate of 3.5 percent, a decrease from 4.4 percent in April.

Specific county information for the month of May is available online at www.tn.gov/assets/entities/labor/attachments/Labor_Force_Estimates%2C_May_17.pdf

“We continue to see a substantial drop in the unemployment rate of our metropolitan areas, which is great,” said TDLWD Commissioner Burns Phillips. “But the most encouraging numbers are coming from Tennessee’s distressed counties, many of which saw a significant drop in their unemployment rates.”

Rhea County’s 5.1 percent makes it the only area in the state with an unemployment rate above 5.0 percent in May. That figure represents a 1.5 percent drop from its revised April 2017 rate, one of the largest rate decreases for the month. The remaining 94 counties have unemployment rates of 4.8 percent or lower. Cannon County was the only area not experiencing any change.

“This shows that job growth in Tennessee isn’t exclusive to our major metropolitan areas; people are returning to the workforce in every corner of our state,” Commissioner Phillips said. “We continue to focus our resources on those Tennesseans who are still out of work, but the numbers show we are making progress.”

The Economic Analysis and Labor Force Estimates are prepared by the Employment Security division’s labor market information specialists. The division reports metrics and contextual information as it relates to employment, income, and population in Tennessee. Economical issues are narrated in monthly newsletters and additional resources are available on www.Jobs4TN.gov