Des Moines, IA – The Nashville Sounds got huge home runs from Matt Olson and Ryan Lavarnway in a come-from-behind 11-8 win over the Iowa Cubs Wednesday afternoon at Principal Park.

Olson hit a two-out grand slam to cap a six-run eighth inning, and Lavarnway launched a two-out, go-ahead three-run homer in the top of the 11th to give the Sounds a lead they held on to. 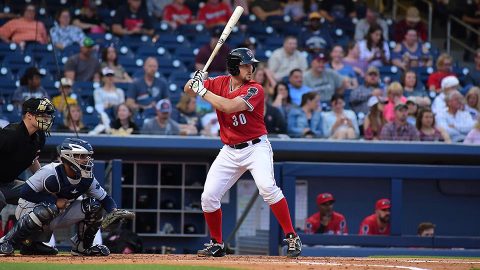 Iowa built a 7-1 lead after five innings with two in the first, two in the third, and three in the fifth. Stephen Bruno launched a three-run homer off of Cotton in the fifth to give the Cubs a comfortable six-run lead.

The comeback bid started in the sixth when Lavarnway knocked in Nashville’s second run of the night with a sacrifice fly. The Cubs got the run right back in the seventh to extend the lead to 8-2.

Nashville’s six-run eighth inning started with a Joey Wendle infield single off Pierce Johnson. After Lavarnway was retired on a fly out, Matt McBride was hit by a pitch that ended Johnson’s night.

Matt Carasiti relieved Johnson and struck out Kenny Wilson for the second out in the inning. With two on and two out, Jaff Decker singled in a run to make it 8-3. Melvin Mercedes followed with another run-scoring knock with a hit up the middle to cut the deficit to 8-4.

Franklin Barreto drew a walk to load the bases for Olson who drilled an opposite field grand slam to pull the Sounds even at 8-8. It was Olson’s 19th homer with Nashville and 23rd overall in 2017.

The designated hitter also drew four walks to tie a Nashville Sounds franchise record for most walks in a single game.

Bassitt did his part with a successful rehab outing. The righty went 1 2/3 scoreless innings before giving way to Lou Trivino who did the same over three frames.

The game stayed 8-8 until Lavarnway’s two-out blast in the 11th. It was his fifth home run of the season and first since May 19th.

The series finale is scheduled for Thursday afternoon at Principal Park. Right-hander Jesse Hahn (0-0, 4.50) starts for the Sounds while the Cubs have yet to announce a starter. First pitch is scheduled for 12:08pm.