New Orleans, LA – The Nashville Sounds were shutout 8-0 by the New Orleans Baby Cakes in a Monday matinee to wrap up an 11-game road trip. The Sounds mustered just four hits and only one batter reached scoring position in the ball game.

Nashville batters were no match for New Orleans starter Odrisamer Despaigne who tossed six scoreless innings. He was perfect through three innings before Jaff Decker opened up the fourth inning with a base hit. Decker’s single was one of just two base runners allowed by Despaigne in his six innings of work. 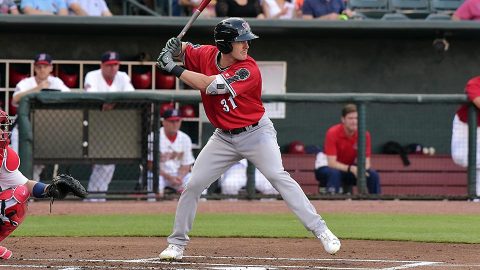 Making his second rehab appearance for the Sounds, starter Kendall Graveman was touched for seven runs on nine hits as he faced 21 batters in just three innings of work. The right-hander needed 30 pitches to get through the first inning and another 24 in the second.

New Orleans jumped Graveman early as eight batters came to the plate in the opening inning. Mike Aviles led off the game with a base hit through the right side of the infield.

Then Graveman jammed Steve Lombardozzi in on the hands with a 94 miles per hour fastball but Lombardozzi muscled the pitch out to shallow left field and legged out a run scoring double to give the Baby Cakes an early lead. Two batters later Brandon Barnes knocked in a run with a single into right field followed by an RBI double from Cal Towey to make it 3-0 Baby Cakes.

Graveman looked to be out of the second inning unscathed but a throwing error by third baseman Renato Nuñez with two outs extended the frame and cost the Sounds dearly. Following the error Brian Anderson singled to left field on the first pitch he saw to load the bases then Graveman plunked Barnes to bring in a run. The next batter, Towey lofted a base hit into shallow center field to drive in a pair of runs and a third run came in to score as Yairo Muñoz took his time getting the ball back in.

Lou Trivino hurled a perfect fourth inning while Ryan Dull made his second rehab appearance for the Sounds and yielded one hit in 1 2/3 innings with a strikeout and a walk. Kyle Finnegan allowed one run on a sacrifice fly in 1 1/3 before handing the ball off to Patrick Schuster who fanned two batters in a scoreless eighth inning.

The Sounds have now played in 12 series since their last series victory at the beginning of June. They have a series record of 0-4-8 since taking three of four from the Iowa Cubs from June 1-4.

The Sounds begin a four game series Tuesday evening in Nashville at First Tennessee Park against the Las Vegas 51’s. Right-hander Jharel Cotton (2-0, 4.11) starts for the Sounds against right-hander Donovan Hand (2-4, 6.92) for the 51’s. First pitch is scheduled for 7:05pm.