Mark Canha drilled a pair of home runs, his 10th and 11th of the season for Nashville to lead the charge. Matt Olson added his 20th of the season and Renato Nunez added to his Minor League lead with his 26th of the year.

It was Olson’s two-run shot in the first that started the barrage. Franklin Barreto started the home half of the frame with a base hit up the middle. Olson followed with a towering blast to right-center off Donovan Hand to give the Sounds a 2-0 lead. 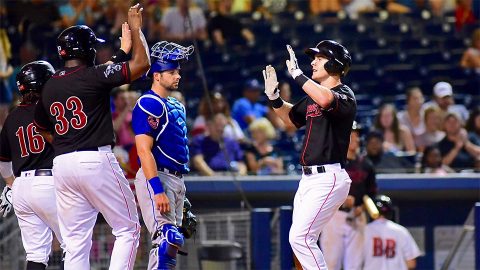 Canha joined the party in the third when he started the inning with his 100th career homer to give the Sounds a 3-0 lead. The offense carried on when Beau Taylor doubled and Yairo Munoz knocked him in with a single. Nunez added a sacrifice fly to cap the three-run inning.

The trouble for Hand continued in the fourth when Nunez drilled an opposite-field solo blast. The shot to right-center made it a 6-0 game. Jaff Decker followed with a double, Chris Carter drew a walk, and Canha drilled a three-run homer to deep left field to give the Sounds a 9-0 lead.

Barreto added an RBI single in the five-run fourth inning that capped the Sounds’ scoring for the night.

It was more than enough run support for right-hander Jharel Cotton. Working on a Major League rehab assignment, Cotton shut out the 51s over six brilliant innings. He allowed only two hits and matched a season-high nine strikeouts.

Cotton allowed a single in the first to Neil Walker, and yielded a double in the third to Phillip Evans. He retired the final 10 batters he faced in his third win of the year with the Sounds.

Las Vegas made noise in the later innings with a single tally in the seventh and three in the eighth to make it a 10-4 game.

Canha’s two-homer game was part of his perfect 5-for-5 night at the plate. In addition to the home runs, he singled in the third, doubled in the sixth, and singled in the eighth. The five-hit game tied a single-game franchise record most recently done by Bruce Maxwell last year.

Four other Sounds had multi-hit games including a 3-for-5 night from Barreto.