Madison, IN – I recently took a weekend trip to ride a few of Kentucky’s motorcycle routes.  The routes I chose, began in Madison, Indiana, so that’s where I set up camp.

Madison Indiana is the county seat of Jefferson County Indiana.  This beautiful city sits along the Ohio River.  It’s population is just over 12,000 people.  Madison is one of the core cities of the Louisville-Elizabethtown-Madison Metroplex, which estimates a population of 1.5 million, according to Wikipedia.  In 2006, the majority of Madison’s downtown was designated the largest contiguous National Historic Landmark in the United States.

When I rolled into town, the first thing that I noticed what that I was right in the middle of “coal” country, as I rode past a huge power plant with those smoke stacks standing tall along the landscape.

I came down off the mountain through a winding, twisty road and rolled into the Madison Historic Downtown District, greeted by some amazing architecture and glancing at the beautiful Ohio river.

The beautiful store fronts, restaurants, coffee shops and more laid out in front of me I couldn’t get enough of how beautiful and vibrant it was.  I noticed that there seemed to be quite a few young people, as if this was a college town.

I was reminded that Hanover College is just a few miles down the road.  Hanover College boasts of a couple of famous alumni.  Vice-President Mike Pence, and Hollywood actor, Woody Harrelson. 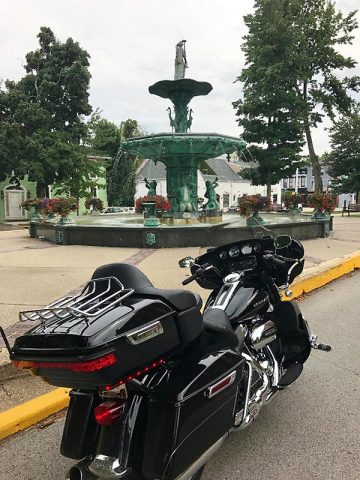 Madison’s most famous attraction is the Madison Regatta.  The Regatta began in 1954 and the unlimited hydroplane race draws nearly 100,000 annually.  Held on the July 4th weekend, a week-long riverfront festival surrounds this event.

The movie, “Some Came Running” starring Frank Sinatra, Dean Martin and Shirley Maclaine was shot on location there.  Some of the cast and crew stayed at the Hillside Inn, which overlooks the river.  It’s believed that during the filming of the movie, that it was the beginning of the famed “Rat Pack.”

I love communities who realize the importance of their downtown district.  It’s the heart of the city.  I also love communities who capitalize on their waterfront.  Madison has a beautiful riverfront park and there’s a steady flow of river traffic, both commercial and recreational.

A visit to Madison Indiana is a trip you won’t regret.