City of Clarksville battered by Heavy Rain and High Winds

Clarksville, TN – Trees and power lines were knocked down by high winds late Thursday and early Friday across the city, while heavy rains forced water over roadways in some low-lying areas.

Emergency management officials said Clarksville saw from 6 to 7.5 inches of rain overnight, and winds with gusts up to 44 mph. The rain was pushing the Red River and the Cumberland River to flood stage. Localized flash flooding was occurring along the creeks and streams that flow into the rivers. 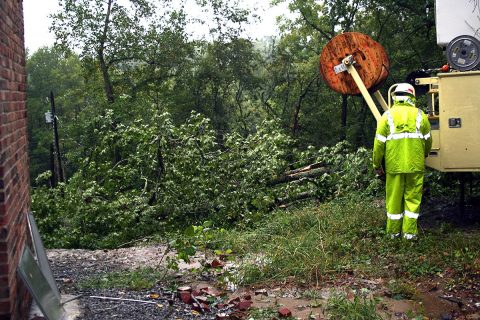 A CDE Lightband worker moves a boom truck into place to repair a power line ripped off a residence by a falling tree in the Idaho Springs neighborhood near Dunbar Cave Road.

“We haven’t had any major public safety emergencies because of the weather, but we’re seeing a lot of down trees and some flooding and power outages,” Clarksville Mayor Kim McMillan said. “All our departments are working to keep people and property safe, and we’re assessing damages as the day unfolds.”

Clarksville Police spokesman Jim Knoll said officers were dealing with hazards caused by water over the roads, but no major weather related vehicle crash or injuries were reported. Knoll said a washout had closed one lane of Vaughn Road, a residential lane off the MLK Parkway.

Deputy Chief Ray Williams said Clarksville Fire Rescue had been busy responding to reports of downed trees and power lines, but no major problems were reported. An apartment fire on Brittan Springs Road at about 8:00pm Thursday had displaced two residents, but that fire occurred before the heavy weather hit, and there were no injuries. 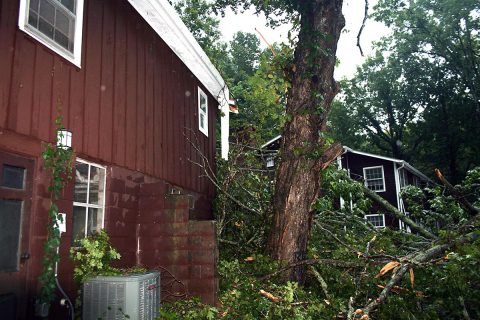 There are fallen tree limbs all across Clarksville.

“Other than that, we responded to two minor fire calls overnight,” Williams said.

Crews with CDE Lightband, the City’s electric power utility, were out in force early Friday to repair downed power lines and restore electricity to some 500 customers who had outages. Clarksville Gas and Water reported that its gas, water and sewer systems were operating normally.

Clarksville Street Department was battling stormwater from the extreme rainfall, which had inundated and filled some drainage basins. Street Director David Shepard said the priority was keeping water away from dwellings by using sandbags to hold water away from structures.

Reacting to the forecast of heavy rain as the remnants of Hurricane Harvey moved through Middle Tennessee, the department started Monday clearing drains and doing preventative maintenance on the stormwater control systems.

Serveral roads were closed by high water, and crews were removing downed trees from roads. The Street Department was monitoring heavily traveled Dunbar Cave Road near Swan Lake, which may have to be closed and detoured if it goes under water near Swan Lake.

Clarksville Parks and Recreation announced that many of the City’s parks and both Swan Lake and Mason Rudolph golf courses were closed until further notice.

“We don’t think the Cumberland will affect Riverside Drive, but it will get into the bottoms on the other side of the river,” Buchanan said. “We will see some water up over parts of McGregor Park and the courtesy dock. We don’t think it’s going to stay up long, and should recede by Wednesday.”

Buchanan said high water was threatening some buildings in low areas near Kraft Street and College Street near the Red River.