Nashville, TN – Tennessee Governor Bill Haslam and Education Commissioner Candice McQueen announced today that the 2016-17 graduation rate of 89.1 percent is the highest on record for Tennessee.

The statewide graduation rate is up more than half a percentage point since last year, and overall it has increased 3.6 percent since the 2010-11 school year. This year, graduation rates increased in nearly 56 percent of districts with high schools. 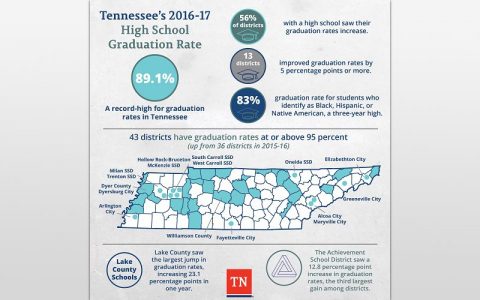 “Teachers and educators in Tennessee have worked tirelessly to support students and these record graduation rates show their hard work is making a difference,” Haslam said. “As more students graduate from high school, we are committed to helping them go to college, succeed and become skilled members of Tennessee’s workforce. The graduation rate is reflective of the many gains we are making in education in our state.”

Under the Haslam administration, Tennessee has set high expectations for both students and educators, and students have made significant gains as a result. The state transitioned to a more rigorous calculation for graduation rates in 2011, and even under the new criteria, rates have continued to rise.

This year, the most notable gains and overall achievements include:

Additionally, the Achievement School District (ASD) had the third largest gain of any district,  up 12.8 percentage points. This historic growth for the district furthers the goals of the ASD as it creates urgency on improving education for all students, particularly those in schools in the bottom five percent of the state for academic performance.

“Teachers and students across the state should be proud of their hard work, and it is always encouraging to see that more students than ever are earning high school diplomas,” McQueen said. “Now we must focus on ensuring students are fully prepared for the academic and professional opportunities that come after high school graduation, so graduates can truly use their diplomas to seamlessly move into their next step.”

As part of the state plan for the Every Student Succeeds Act (ESSA), the Department of Education has created an accountability metric known as the Ready Graduate indicator.  This new tool will measure the percentage of graduates who have met benchmarks proven to increase their probability of seamlessly enrolling in postsecondary education and entering the workforce or military.

More information on graduation rates for individual districts and schools [1] is available on the Tennessee Department of Education’s website [2].