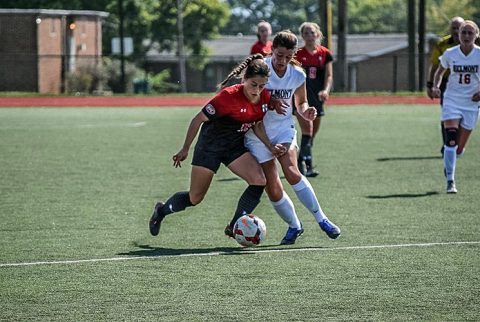 The first half was a tale of two offenses, as the Govs went down two goals early in the first half with the Bruins getting goals from Emily Whitcomb, 19th minute, and Sydney Carson, 26th minute.

Despite the heat and defensive pressure the Govs fought back late in the first half. Freshman Claire Larose [1] brought a spark in off the bench. She opened the scoring for the Governors in the 29th minute picking up a through ball from freshman Morgan Drawdy [2] and slotting it in the lower right corner.

Redshirt sophomore Pamela Penaloza [3] found the equalizer in the 30th minute with another great through ball from Drawdy. The Belmont keeper came off her line, but Penaloza hammered a shot in the back of the net.

Austin Peay (5-3-1) and Belmont (5-3-1) traded shots in the second half, but neither team could find the back of the net until Megan Michela headed a cross that got past sophomore keeper Mary Parker Powell [4] in the 85th minute.

The Govs pressed Belmont for another equalizer, but couldn’t get a good look at goal.

Powell pulled in 2 saves bringing her season total to 14.

This is the fourth time the Govs have played Belmont on the road; they are 2-2-1 all time.

Larose’s 29th minute goal was her third of the season putting her second on the team in scoring.

“We need to recover, and focus on our next opportunity to play. Every game is an opportunity to learn and get better. No game is going to be dictated by one team, it’s going to be a battle and we need to do a better job of weathering some storms, controlling the tempo of the game and being a little more effective in the attacking third.”

Up Next for APSU Soccer

The Govs will play their first OVC match at home next weekend 7:00pm Friday against SIU Edwardsville and 1:00pm Sunday against Eastern Illinois. Both matches will be at Morgan Brothers Soccer Field in Clarksville Tennessee.