APSU Football heads to Murray State for Battle of the Border 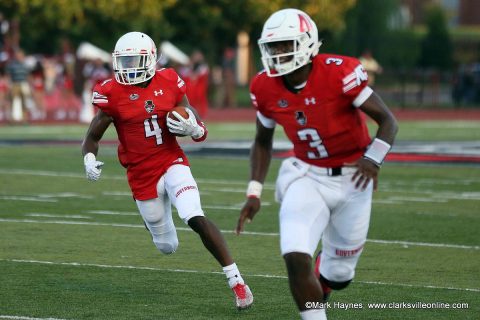 APSU put up at least two touchdowns in every single quarter on their way to its highest margin of victory (56) since defeating Kentucky Wesleyan in 1994.

Murray State (1-2) comes into the contest off two straight losses, most recently a 28-21 setback last week at Missouri State. Racer signal caller Shuler Bentley ranks third among OVC quarterbacks in passing yards (527), but he will be facing a stingy Govs defense that allows just 188.7 passing yards per game.

The rivalry between the Govs and Racers dates back to 1963 with Murray State holding a 36-14 all-time advantage. Kyran Moore [3] picked up 128 all-purpose yards in last year’s contest, but APSU has dropped two straight in the series since picking up a 20-13 win on October 8th, 2014.

Battle of the Border

For the second consecutive year, Heritage Bank is presenting the Battle of the Border. A season-long competition between Austin Peay and Murray State, the Battle of the Border awards points for each regular-season contest in eight sports between the two programs while the other six sports will have points determined by their finish in their respective OVC Championship.

Saturday’s football contest is the opening event for this season’s competition.

To follow all things Austin Peay football, visit our website at LetsGoPeay.com or check out the official Facebook page of Austin Peay Athletics. Live play-by-play can be found on Twitter @AustinPeayFB or by visiting Peaystats.com. Coverage of this weekend’s game will be streamed live on the OVC Digital Network.