Clarksville, TN – Austin Peay State University’s volleyball team enters Ohio Valley Conference play with an 11-2 record and will look to maintain its hot start when it opens the league slate with a pair of weekend contests. 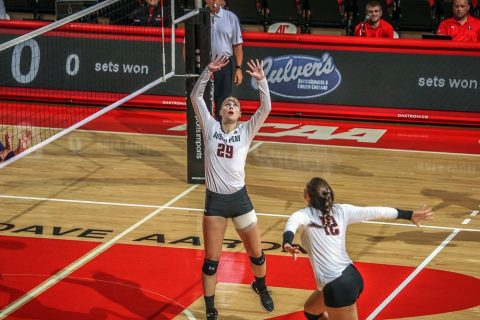 The Govs will first host SIU Edwardsville in a 7:00pm, Friday contest before meeting Eastern Illinois in a 2:00pm, Saturday affair at the Dunn Center.

Admission to both contests is free to the public and Austin Peay students.

This weekend also is Austin Peay’s annual Parents Weekend and the team will recognize all its parents in attendance during Saturday’s contest.

SIUE (10-2) brings a five-match win streak into the OVC opener, sweeping all three matches at its own Cougar Invitational last weekend.

Cougars junior outside hitter Taylor Joens had a phenomenal weekend with 37 kills, a .537 attack percentage and 17 blocks. She was named the Sports Imports/AVCA Player of the Week along with earning adidas® OVC honors.

Eastern Illinois (6-6) enters the weekend with wins in its last two matches, posting a 2-1 record at the Indiana State tournament.

The Governors enter OVC play ranked No. 18 in the VolleyballMag.com Mid-Major Poll presented by the National Invitational Volleyball Championship (NIVC).

Junior Kristen Stucker [1] earned her third OVC Setter of the Week award, Monday, in the season’s fourth week. She led the Govs to a .233 team attack percentage while averaging 13.18 assists per set and 3.00 digs per set at the Jacksonville Invitational.

Senior Allie O’Reilly [2] nabbed her first career OVC Defensive Player of the Week honor. She averaged 5.00 digs per set at the Jacksonville Invitational and was charged with only two reception errors in 76 attempts.

Senior Ashley Slay [3] was a nominee for the OVC Offensive Player of the Week. She averaged 4.09 kills per set at Jacksonville while posting a .309 attack percentage.

Slay also became the 14th Govs hitter to record 1,000 career kills while in the Sunshine State.

Slay (MVP), O’Reilly and redshirt junior Christina White [14] were each named to the Jacksonville Invitational all-tournament team. Austin Peay was successful away from Clarksville last season, posting a 9-3 record in true road games and an 8-4 mark in neutral court contests.

Austin Peay returns 11 players (lost two) from last season’s team that posted the fifth-best win-loss record improvement among Division I teams and finished with the most wins (24) of any Tennessee Division I team.

2016 First-Team All-OVC selections Kristen Stucker [1] and Ashley Slay [3] return for the 2017 campaign. Stucker is the reigning OVC Setter of the Year.