In addition, Jordan Coffey [3] has joined the Governors coaching staff as a volunteer assistant. 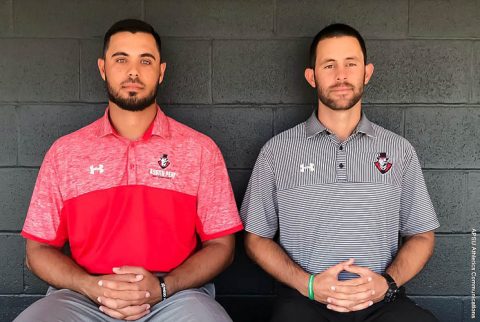 Weber, a Fort Walton Beach, Florida native, will move into a full-time role vacated by Romans. In his new role, Weber will take over as the team’s hitting instructor and will work the catchers during the upcoming season.

Weber joined the Govs last season after serving as an assistant coach and recruiting coordinator at Northwest Florida State College in 2016. While with the Raiders, he had the opportunity to coach NJCAA Division I First-Team All-American Hunter Tackett.

The time in Florida followed three seasons at Northeastern State, where he was a player for Janssen before becoming a graduate assistant coach. In 2015, he helped with hitting instruction and worked with catchers and outfielders in his first coaching position. Weber followed that by serving as head coach of the Vail Vipers of the Mountain West Summer Collegiate Baseball League, leading that team to a league runner-up finish.

“David will help us from both a recruiting and teaching standpoint,” said Janssen. “He is a young coach who hustles and is very talented.  Last season, he was able to form great relationships with the players.  As a player, Coach Weber was a tough overachiever who had a great mind for the game.  He was an all-conference type of player, but his toughness and team-first attitude is what set him apart.”

Coffey, a Batavia, Illinois native, joins the Austin Peay coaching staff after serving as graduate assistant pitching coach at Indiana Wesleyan the past two seasons. In addition, he spent this past summer as pitching coach for Kenosha Kingfish of the Northwoods League.

While with Kenosha, Coffey had the opportunity to work with Governors senior left-hander Michael Costanzo [4], who finished his time in the Northwoods league with 48 strikeouts in 43.2 innings pitched.

Coffey, who was both a pitcher and outfielder at Taylor University in Indiana, was a three-time all-conference selection and a gold glove winner. On the mound, he posted an 8-3 career record with 49 strikeouts. Coffey also was a .335 career batter with 30 home runs and 174 RBI.

“When we went to find a new coach for the volunteer assistant position, we were very diligent with the search,” said Janssen. “Along with being a solid coach, it was important to get somebody in here with high character who would fit our coaching staff’s personality.  Jordan will direct our camps, coach the outfielders, and will also help with our pitching staff.  Right now, his role is still evolving, but early on he has proved very valuable.