Knoxville, TN – Tennessee saw a two-game winning streak in the series end Saturday, as #7/8 Georgia defeated the Vols, 41-0, in front of a sellout crowd of 102,455 at Neyland Stadium.

UGA freshman quarterback Jake Fromm ran for a pair of touchdowns and threw for another to lead the way for the visitors. Running back Nick Chubb added 109 yards on 16 carries to pace a stout rushing attack. 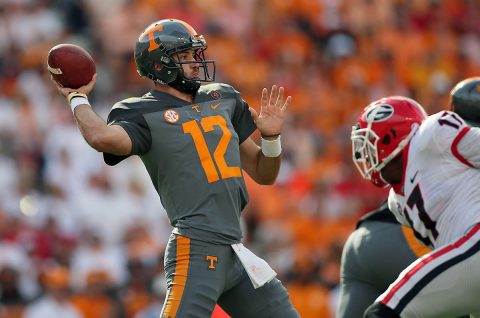 Tennessee Volunteers quarterback Quinten Dormady (12) looks to pass the ball against the Georgia Bulldogs during the first half at Neyland Stadium. (Crystal LoGiudice-USA TODAY Sports)

“I thought we had a great week of preparation,” UT head coach Butch Jones said. “I thought the kids were ready to play. I think it’s an accumulation effect when you have opportunities to make a play relatively early in the game and you don’t. You lose those opportunities.

“We had some opportunities for some big plays on offense that we didn’t come up with receptions, and I think everything snowballs from there. When you’re playing a team as good as Georgia, every opportunity you get to make a play, you have to make a play. You’re not going to win many games turning the football over four times.”

Georgia used the first UT turnover to get on the scoreboard quickly. Tyrique McGhee intercepted quarterback Quinten Dormady on the first play of the game’s opening series, setting his team up at the Tennessee 27. The Vol defense, led by Quart’e Sapp’s 10 total tackles on the day, responded to the challenge. Gaining only seven yards in three plays, UGA had to settle for a 38-yard Rodrigo Blankenship field goal, putting the visitors up 3-0 with 13:37 to go in the opening stanza. 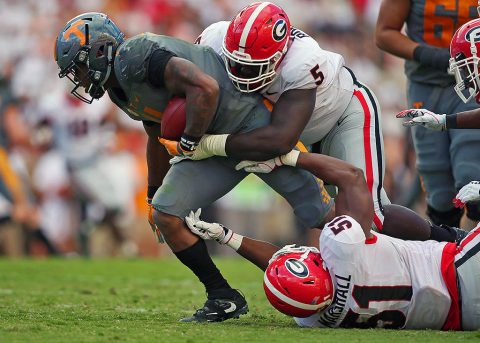 The Bulldogs pushed the lead to 10-0 with 6:10 to go in the first quarter, when Fromm found receiver Javon Wims in the end zone for a 12-yard touchdown pass. Blankenship kicked the PAT to put the finishing touches on a seven-play scoring drive that covered 54 yards in 2:41.

After Fromm was intercepted by Tennessee cornerback Justin Martin at the Georgia 27 early in the second quarter, it appeared the Vols were in position to respond. A faulty exchange of a shotgun snap, however, ended the Big Orange threat two plays later, as UGA’s Lorenzo Carter pounced on the loose ball at his team’s 29.

Georgia extended its lead to 17 with 7:13 to go in the second frame, as Fromm was flushed from the pocket and scrambled nine yards to pay dirt. Blankenship added the extra point to make it 17-0, Bulldogs.

Georgia padded its lead again before the intermission, thanks to an interception and 34-yard return by safety J.R. Reed. Fromm took it from there, guiding the Bulldogs 26 yards in five plays, capping the short drive himself with a four-yard run. Blankenship’s PAT pushed the score to 24-0 at the break.

Tennessee appeared to be on the verge of making some noise early in the third period, when Kelly took a Dormady pass 44 yards to the Georgia 33. At the end of the play, while Kelly was struggling for extra yards, Bulldog corner Aaron Davis knocked the ball loose, and teammate J.R. Reed recovered, ending the Vol drive.

Georgia struck again with 1:04 left in the third quarter, this time on a 21-yard dash by running back Sony Michel. Blankenship tacked on the extra point to make it 31-0.

A blocked Trevor Daniel punt by D’Andre Walker at the beginning of the fourth quarter set the Bulldogs up at the Tennessee 26. Six plays later, running back Brian Herrien punched it in from three yards out. Blankenship’s kick lifted Georgia’s advantage to 38-0.

With sophomore quarterback Jacob Eason on in relief in the fourth quarter, a short UGA drive reached the Tennessee two-yard-line before the Vols halted it. Back-up kicker David Marvin came on to boot a 19-yard field goal with 5:34 left to provide the final margin.

“Right now, we’re being tested; that’s what I told our football team,” Jones said. “Our character is being tested, everything about us. There’s no excuses, and there is no hiding from it. We’re going to find out who the true leaders and true competitors are.

“The bye week is coming at the right time. We’re 3-2 with a lot of football to be played, and we’re going to find out what we are made of.”

Next Up for UT Football

The Vols return to action on October 14th when South Carolina comes to town. The kickoff time has not been set.