This is the third consecutive season in which the Titans and Dolphins have played and the second straight year the Dolphins have hosted the meeting. In 2015, the Dolphins took a 38-10 decision at Nissan Stadium, and the Titans returned the favor with a 30-17 win in South Florida in 2016. Miami leads the all-time series 19-17.

The game will be televised regionally on CBS, including Nashville affiliate WTVF NewsChannel 5. Play-by-play announcer Andrew Catalon and analyst James Lofton will call the action.

Additionally, Sports USA will broadcast the Titans-Dolphins game to a national radio audience. Play-by-play announcer Josh Appel and analyst Hank Bauer will have the call.

The Titans entered last week on a two-game winning streak, having defeated the Jacksonville Jaguars on the road and the Seattle Seahawks at home. However, their momentum was halted in Houston.

The Texans used five total touchdowns—four passing and one rushing—by rookie quarterback Deshaun Watson to cruise to a 57-14 victory.

In the loss, Titans quarterback Marcus Mariota did not play in the second half due to a hamstring injury. Prior to exiting, he recorded his first career performance with two or more rushing touchdowns.

Also, Walker reached 300 receptions as a member of the Titans.

Only nine other players, including only one tight end (Frank Wycheck), have accomplished the feat in franchise history. 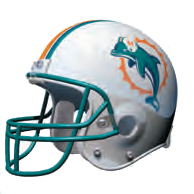 This will mark the first appearance by the Dolphins at Hard Rock Stadium during the 2017 regular season. Their Week 1 home opener against the Tampa Bay Buccaneers was postponed until November 19th due to Hurricane Irma, and they subsequently played the San Diego Chargers (19-17 win) and New York Jets (20-6 loss) on the road in Weeks 2 and 3.

Last week the Dolphins traveled to London to face the New Orleans Saints. Saints quarterback Drew Brees passed for 268 yards and two touchdowns, and the Saints defense kept the Dolphins off the scoreboard to win 20-0.

The Dolphins are in their second season under head coach Adam Gase. The former Broncos and Bears offensive coordinator led the Dolphins to a 10-6 record in 2016 and became the fourth head coach in franchise history to lead the team to the postseason in his first year as head coach.

Gase’s staff includes a trio of former Titans assistant coaches: defensive coordinator Matt Burke, wide receivers coach Shawn Jefferson and assistant head coach/linebackers Frank Bush. Dolphins quarterback Jay Cutler was signed by the club during training camp after an injury to incumbent Ryan Tannehill. The former Vanderbilt Commodore is in his 12th NFL season, having spent three years in Denver (2006–2008) and the next eight years in Chicago (2009–2016). In 2017, he has completed 70 of 105 passes for 614 yards with two touchdowns and two interceptions.