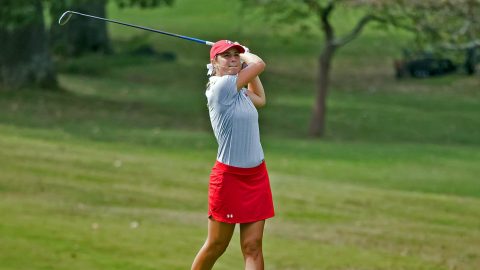 Greene’s 75—best by a Governor throughout the two-day event—gave her a second consecutive top-20 finish; she moved her up six spots into 18th, finishing with a 237 (78-84-75); her 2.83 stroke average on par-3 attempts were best in the tournament, while her 34 pars led Austin Peay.

Clarksville natives AnnaMichelle Moore [4] and Riley Cooper [5] rounded out the day for Austin Peay, tying for 46th at 250. Moore (88-81-81), a senior, averaged 3.08 per hole on par-3 attempts, part of a concerted effort by the Govs on par-3 holes; as a group, Austin Peay averaged a tournament-best 3.15 strokes on par-3 for the tournament.

“We’re very proud of the solid golf Reagan played today,” said head coach Sara Robson [7]. “We managed the course a bit better today but for the most part it was hard to get anything going. We’ve been plagued by big numbers and we have to get rid of them with a short turn around this weekend.”

ULM’s tournament was just the beginning of a busy week for Robson’s charges. The Govs continue a packed fall schedule this weekend at the Winthrop Intercollegiate, October 21st-22nd, in Rock Hill, South Carolina.