Tampa Bay, FL – The average price at the pump has fallen for 15 of the last 20 days, for a total savings of seven cents per gallon.

“Drivers continue to pay in excess of 20 cents more for a gallon of gasoline than they did in 2016, which may prove challenging for those looking to put away some extra cash for the holidays,” stated Casselano. 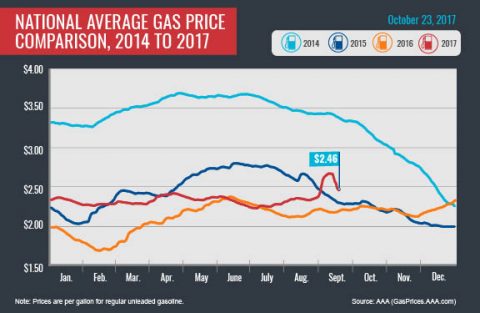 The refinery utilization rate in the region remains a concern after this week’s Energy Information Administration (EIA) report found that the utilization rate fell seven percent for the week ending on October 13th. A lower utilization rate means that less crude oil is being processed to make refined products like gasoline.

However, gasoline stocks are still above the five year average, which has helped to keep prices stable in the region. Next week’s West Coast refinery utilization could come under further downward pressure, due to a fire at Chevron’s 290,500-b/d El Segundo, CA, refinery on October 17th. Chevron has not provided updates on the status of the refinery.

On a separate note, drivers in California are likely to see prices at the pump increase next week if the state gas tax increase is implemented as expected on November 1st. The tax rate for gasoline will increase 12cts/gal, from 29.7cts/gal to 41.7cts/gal. In addition, a storage tax will be imposed on all gasoline and diesel retailers, wholesalers and suppliers holding 1,000 gallons or more of tax-paid gasoline.

Prices for motorists in the Rocky Mountain region remain stable, moving only +/- 2 cents on the week. Over the past month, the region has experienced moderate declines: Idaho (-8 cents), Utah (-7 cents), Colorado (-4 cents) and Montana (-3 cents).

At the moment, prices moderately increased in some parts of the region which can likely be attributed to refinery maintenance and the steady decline in gasoline inventories. According to the latest EIA data, regional refineries are running at less than 85 percent capacity and gasoline inventories are at a nearly 3.5 million bbl deficit compared to this same time last year.

The latest EIA report shows that gasoline supplies in the region dropped 300,000 bbl, which is likely due to growing U.S. exports. Despite the recent declines, overall inventories are up, reaching 17 million bbl as of last week.

At the close of Friday’s formal trading session on the NYMEX, WTI increased 18 cents to settle at $51.47. As the week progresses, the oil market appears poised to continue making gains. Last week’s EIA report noted a drop in crude inventories by 5.7 million barrels. The decrease is likely due to crude exports increasing to 1.8 million barrels per day, according to EIA.

Moreover, as expected, crude oil demand in the U.S. is down by 1 million b/d from last year, while total crude inputs at U.S. refineries dropped by 819,000 b/d. Additionally, the U.S. rig count fell by 7, with the latest decline leaving 736 rigs active in the U.S., according to Baker Hughes, Inc. All of this data points toward weak domestic demand and decreased production of crude. As domestic crude demand slows, the ability to sell crude outside of U.S. markets through exports has helped push the price higher.

As the market gets tighter, market observers will closely watch this week’s EIA report to see if the trends continue. Additionally, the upcoming OPEC meeting scheduled for November 30th in Vienna will also help the market assess the 2018 horizon for oil prices. At the meeting, OPEC and non-OPEC members who have agreed to cut production through March 2018 will discuss the status of the agreement and may decide to take additional measures to deepen the agreement’s market impact.