First, the OVC-leading Govs will face a fast-rising Eastern Illinois squad in a 7:00pm, Friday contest at Lantz Arena. Austin Peay then meets second-place SIU Edwardsville in a pivotal 2:00pm, Saturday showdown at the Vadalabene Center. 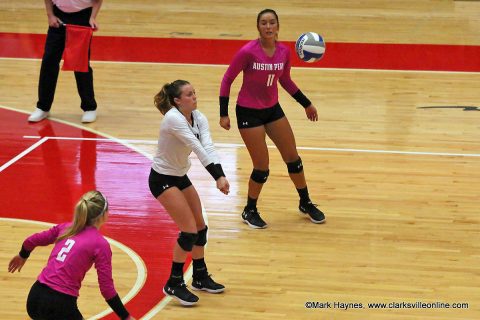 Austin Peay continues to be ranked among Division I’s top 70 in RPI, standing firm at No. 67 in the latest RPI released by the NCAA, Monday, leading all OVC teams.

The Govs were moved back up to No. 17 in this week’s edition of the VolleyballMag.com Mid-Major Poll presented by the National Invitational Volleyball Championship (NIVC).

Senior Ashley Slay [10] enters the weekend with 325 career blocks (tied-2nd all-time) after an eight-block week that included six blocks against Belmont. She also had a 16-kill effort against Tennessee State.

She averaged 10.25 assists per set during the week while leading the Govs to a .224 team attack percentage.

Stucker has been on of the most prolific Division I setters, ranking third it total assists (1,048) and 22nd in assists per set (11.27) entering the regular season’s final three weeks.

Sophomore Ginny Gerig [12] led a Govs defense that held Belmont and Tennessee State to a combined .132 attack percentage last week. She averaged 4.38 digs per set, including 18 digs against Tennessee State.

She now is a win away from becoming the second head coach to record 100 wins at Austin Peay.

SIU Edwardsville (18-4, 8-2 OVC) has rattled off eight-straight wins since dropping both ends of the APSU-Murray State trip in September. The Cougars are the OVC’s best-hitting team (.294 attack percentage) and own the league’s best defense, limiting teams to a .158 attack percentage.

Taylor Joens leads all OVC hitters with a .383 attack percentage while ranking fifth in kills (3.19/set).