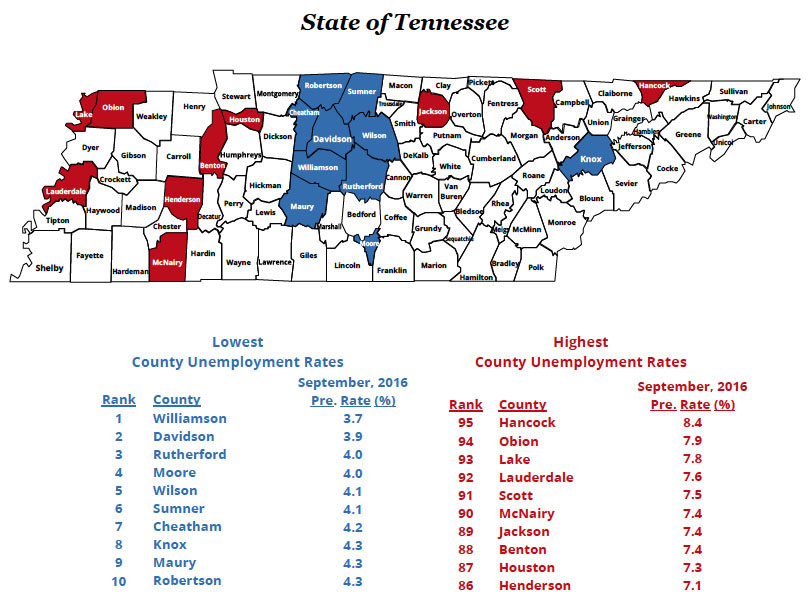 Nashville, TN – Tennessee Governor Bill Haslam and Department of Labor and Workforce Development Commissioner Burns Phillips announced that in September 2017, for the first time ever, below 5 percent in every county across the state. This is the second consecutive month rates have declined in each of Tennessee’s 95 counties. 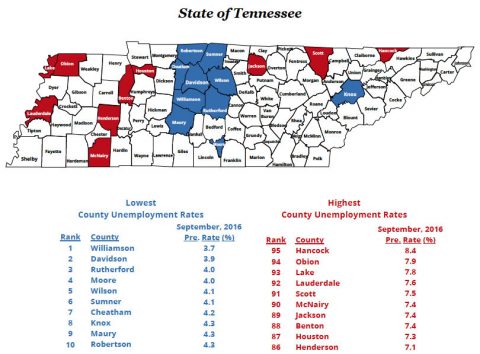 At 3 percent, Tennessee has the lowest unemployment in the southeast and the eighth lowest rate in the nation.

“With every county seeing unemployment rates below five percent and with a record statewide unemployment rate, Tennessee’s fiscal strength is clear and the investment in our workforce is paying off,” Haslam said. “Employers know that Tennessee is a place where they can find skilled workers, so they continue to expand and relocate here.”

“Many of the most notable decreases in September took place in counties with the highest unemployment rates, pointing out the economic growth and opportunity in some of Tennessee’s most distressed counties,” Phillips said.

This is the fourth time in 2017 unemployment rates have decreased in all 95 counties. Rates also dropped in every county during February, April and August. Unemployment data for each of Tennessee’s 95 counties is available here.

The improved county statistics for September follow the fourth consecutive month Tennessee experienced a record low statewide unemployment rate, which was 3 percent, down 0.3 percent from August. The national unemployment rate also dropped in September to 4.2 percent.

The statewide and national unemployment rates are seasonally adjusted, but the county rates are not. Seasonal adjustment is a statistical technique that eliminates the influences of weather, holidays, opening and closing of schools and other recurring seasonal events from an economic time series.

Additional information about Tennessee’s labor statistics, as well as job search resources and postings, can be found at Jobs4TN.gov.