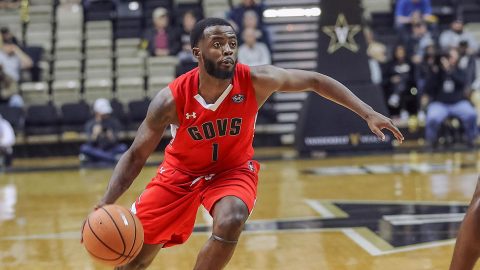 The coaching staff got an encouraging start against Vanderbilt in the regular season opener, playing the Commodores within a couple of possessions for most of the first half and cutting the deficit to single digits late in the second.

The defensive intensity exhibited by the Govs will be necessary against a highly-efficient Virginia offense.

Freshman Terry Taylor [1] has emerged as the primary scoring option, leading the Govs in scoring in both the exhibition and the season-opener against Vanderbilt. The Governors will look to diversify the scoring more against a Virginia defense that’s been one of the nation’s toughest for the last six seasons.

Virginia head coach Tony Bennett has brought lock-down defense to Charlottesville; the Cavaliers have ranked either first or second in the NCAA in opponent scoring in five of the last six seasons, and held 24.6 percent of foes to fewer than 50 points during his nine-year tenure. John Paul Jones Arena has proven to be a tough place to play over the years—the Cavs are 151-40 since moving into JPJ 12 years ago.

Last Time Out Against Virginia

This will be the Govs first-ever appearance against Virginia, and first skirmish with an ACC foe since 2009 (North Carolina State).

Taylor Starts Strong
Taylor did something pretty unique in his first regular season appearance for the Red-and-White. The Bowling Green native led all scorers with 15 points against Vanderbilt; Austin Peay’s electronic record-keeping, which dates back to 2001-02, indicates that no other APSU true freshman in that time span has led all scorers in his collegiate debut.

DEEEE-fense
After allowing Vandy to hit 50 percent from the floor in the first half, the Governor defense stymied the Commodores in the second, limiting Vanderbilt to 39.3 percent from the floor and forcing 10 turnovers. The Govs hope that second-half success carries over against a Virginia squad which finished second in the ACC in three-point shooting (39.3 percent) and turnovers (9.5 per game) a year ago.

Youth Will Be Served
With nine newcomers aboard after a program overhaul, the Govs will trot out one of the nation’s freshest rosters under first-year head coach Matt Figger [3]. The Govs rank eighth in fewest returning starts (32), sixth in fewest returning lettermen (four) and fifth in returning minutes played (1,392).

Different Changes
Austin Peay men’s basketball regular-season home-opening contest against Oakland City, originally scheduled for a 7:00pm tip-off, November 16th, has been moved to November 15th at the same time. This is in conjunction with Austin Peay State University volleyball’s regular-season championship secured thanks to Saturday’s win; the Govs will host the 2017 Ohio Valley Conference Championships in the Dunn Center, November 16th-18th.

Fans can purchase their season tickets or Govs Club memberships by contact the Governors Athletics Ticket Office at 931.221.PEAY [7329] or by email at [4].

Check back at LetsGoPeay.com and on Austin Peay’s Official Athletics Facebook page often for up-to-date news about all Governor athletics, as well as the Governor men’s basketball Twitter page (@AustinPeayMBB). Live stats will be available during the game at PeayStats.com, and all home games and Ohio Valley Conference games can be viewed on www.ovcdigitalnetwork.com [5].

Postgame video interviews and other videos from around APSU Athletics can be found on our YouTube page (www.youtube.com/letsgopeay). [6]