Clarksville, TN – It’s not a tournament if you don’t have at least one upset in it and Eastern Illinois did just that in the quarterfinals of the Ohio Valley Conference Volleyball Tournament, November 16th at the Dunn Center, as the Panthers defeated the Southern Illinois Edwardsville 3-1 (25-27, 25-20, 25-19, 25-19).

The seventh-seeded Panthers (15-14) only took one set off the second-seeded Cougars (23-6) during their two regular-season meetings, but could have beaten SIUE in three straight sets if not for a cold stretch at the end of the first set. 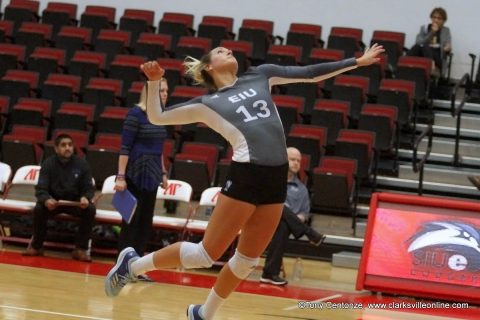 An upset in the first round of the OVC 2017 Volleyball Championship tournament as #7 seed Eastern Illinois beats #2 seed SIUE 3 sets to 1.

The opening set saw Eastern Illinois lead for most of the way, taking the lead 2-1 on a service ace by Jackie Scott, and holding that lead until SIUE tied the game 11-11 on a kill by Emily Harrison.

A kill by Laurel Bailey put the Panthers up again, 12-11, with EIU building a lead as much as five points, 19-14, following a serve error by SIUE.

The Cougars would get to within two points, 22-20, on a kill by Kiana Field, before the Panthers got to set point, 24-20, on an Gina Furlin ace.

A kill by Bailey would give the Panthers their final game point attempt of the opening game, but SIUE would end the game by scoring three straight points to win the game, 27-25.

Set 2 had the Panthers getting out to an early 4-2 advantage, but that lead was short lived with SIUE scoring four of the next five points – including two kills by Taylor Joens — to take an 8-5 lead.

The Cougars would hold that lead as late as 11-10, before EIU tied the game for the fourth time, 11-11 on an ace by Katie Shashack.

That point would key a solid run by the Panthers, who held that advantage the rest of the way, never letting the Cougars get any closer than two points after that on their way to a 25-20 win and leveling the match at one set each.

In Set 3, EIU overcame an early 5-4 deficit versus the Cougars to build 10-5 lead behind a couple of kills by Katie Sommer, while also being aided by four attack errors by SIUE.

SIUE would finish with 32 attack errors, while EIU only had 17.

The Panthers wouldn’t really be challenged the rest of the way in the set, with the Cougars never getting any closer than three points of the Eastern Illinois, as the Panther took a 2-1 games advantage with a 25-19 third-set win.

Eastern Illinois wouldn’t let their foot off the gas in the fourth set, as they took the lead for good at 4-3 on an ace from Jordyn Klein, as was that extent out to as much as eight points, 23-15, before closing out the match 25-19 to advance to a 2:30pm, Friday, November 17th, semifinal match versus Murray State at the Dunn Center.