Knoxville, TN – Tennessee takes on No. 20 LSU on Saturday at Neyland Stadium. The game will feature a 6:00pm CT kickoff on ESPN.

Bob Wischusen (play-by-play) and Brock Huard (analyst) will be in the booth and Allison Williams will report from the sidelines. Vol Network radio affiliates will have a live audio broadcast with Bob Kesling, Tim Priest, Brent Hubbs and Maddy Glab. Sirius Channel 138 and XM Channel 190 will also carry a live audio broadcast. 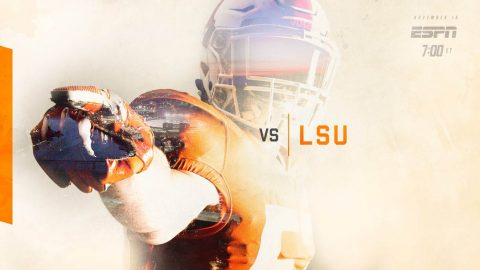 True freshman quarterback Will McBride made his first start and completed 16 of 32 passes for 139 yards with one touchdown and two interceptions. McBride also led the Vols in rushing with 63 yards on 14 carries.

Saturday’s game will mark the first meeting between Tennessee and LSU since 2011. Tennessee holds a 20-9-3 all-time edge in the series, which dates back to 1925. The Vols are also 11-3-1 all-time against LSU when the game is played in Knoxville.

Tennessee’s last win over LSU was on September 27th, 2005. The 10th-ranked Vols traveled to Baton Rouge to face the No. 4 Tigers in their home opener after LSU’s first game was changed to a road game because of Hurricane Katrina. After trailing 21-0 at halftime, LSU-transfer Rick Clausen led the Volunteers to a 30-27 victory in overtime. Clausen finished the game 21-for-32 passing for 196 yards and a touchdown to go along with a rushing score.

Running back Gerald Riggs Jr. had 89 yards rushing a pair of scores on 24 carries, including the game-winning touchdown in overtime. That 2005 win was Tennessee’s most recent victory over a team ranked inside the top-5 of the AP Poll and is the last ranked win the Vols have against a team from the SEC West.

On Monday, Hoke emphasized that he and the coaching staff are focused on the team’s seniors.

“These last two games are only about one thing, and that’s the seniors on this football team,” Hoke said. “They have been part of 29 wins, three bowl wins and they’ve laid a foundation for this program that was badly needed. They’re the ones who we play for.”

Smith Continues To Impress On O-Line

Smith is a frontrunner for Freshman All-America, All-SEC and All-America honors as he leads the Vols with 48 knockdowns. He is the second-highest grade Vol on the offensive line behind only senior Jashon Robertson.

Smith started the first eight games of the season at right guard before moving to left tackle for the last two games. He enrolled at UT in the spring of 2017 and was the nation’s No.1 overall recruit in the class of 2017 according to ESPN.

Redshirt senior punter Trevor Daniel is one of 78 final candidates for the Ray Guy Award, which is given to the nation’s top collegiate punter.

Through 10 games this season, Daniel has 62 punts for 2,919 yards and a 47.1-yard average, which ranks fourth in the nation. Daniel’s 26 punts inside opponents’ 20 are tied for third in the nation and lead the SEC. His 29 punts of 50 or more yards lead the nation.

His 45.7-yard career average is the best in Tennessee history and is third among active NCAA punters, regardless of division.

The 1997 SEC Champion Tennessee team will be honored on the field on Saturday during the first quarter.

A pair of VFLs will lead military flyovers prior to this Saturday’s game versus LSU.

At 4:45pm, Air Force Captain Leigh Smith will pilot one of five F-15 jets for a flyover during the Vol Walk. Smith was a three-time All-American and a 2008 Olympian in the javelin.

VFL and former Tennessee football player Capt. Stan Jones will fly an F-18 Hornet over Neyland Stadium before the start of Saturday’s game at 5:55pm at the end of the national anthem.

Capt. Jones earned a bachelor’s of science in industrial engineering and a master’s of science in aviation systems from the University of Tennessee. He has accumulated over 3,000 flight hours and 623 carrier arrested landings and he has flown 30 different aircraft types.