Clarksville, TN – For the fourth year in a row, Austin Peay State University track and field will open its indoor season with a trip to Nashville to take part in the Vanderbilt Indoor Opener, Saturday, at Vanderbilt’s Multipurpose Facility. 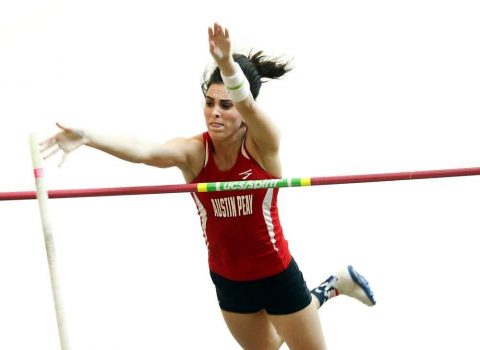 Sixteen schools kick their season off in Nashville.

In addition to the Govs, the Ohio Valley Conference will be represented by Belmont, Murray State, Southeast Missouri, Tennessee State, Tennessee Tech and UT Martin, while Berry, Campbellsville, Jackson State, Louisville, Memphis, Mercer, Middle Tennessee, Trevecca, Western Kentucky and the host Commodores round out the field.

The Govs will put at least one competitor eight of the 13 events in Nashville, with the pole vault set to play a prime role. Two-time NCAA East Preliminary qualifier Savannah Amato [1] is in the mix, as are senior Gretchen Rosch [2] and talented newcomer Morgan Bradley, a two-time all-state selection in Kentucky.

Fresh off her journey to the 2017 NCAA Student-Athlete Leadership Forum, junior Nia Gibbs-Francis [3] is among the top seeds in the high jump; with the departure of Kaylnn Pitts [4] and Chancis Jones [5], Gibbs-Francis is one of the upper-echelon jumpers remaining on head coach Doug Molnar [6]‘s roster.

Talented hurdles newcomer Lennex Walker—who won five events for CSAS at the 2017 TSSAA Class A-AA State Track and Field Championships—will make her debut in the 60m hurdles, alongside Kamille Dunbar and Denia Hill-Tate. That same trio, along with veterans Garielle Netter [7], Allysha Scott [8], Diamond Battle [9] and others, will represent the Govs in the 200m dash.

Battle, who finished just off the podium in her first OVC Indoor Championship appearance last season, starts her march toward an OVC Individual medal in her sophomore season.

The Govs will have a busy pre-Christmas stretch, continuing the indoor slate next Saturday at the Saluki Fast Start in Carbondale, IL.