Former Austin Peay golf coach Kirk Kayden, along with current Govs coach Robbie Wilson [1], were in Chandler, AZ, this past weekend, watching a trio of former Govs attempt to earn their playing cards in the Web.com Tour Qualifying Tournament.

Kayden, now the Mercer men’s golf coach, couldn’t help but gush about watching the three former Govs: “It was so much fun watching these guys getting a chance to realize their dreams. It was a pretty special thing, a once-in-a-lifetime deal…Three of your former players are playing in Web.com final. That just doesn’t happen. I had to make it work; I had to be there.” 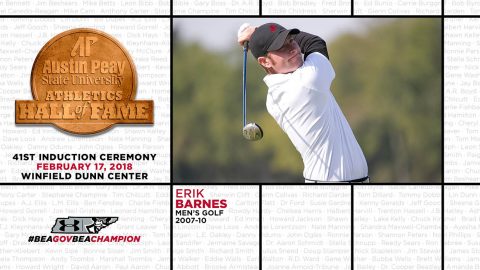 On the one hand was the 6-7 Grant Leaver, who was a good enough basketball player to gain Governors walk-on status and even earn a start in 2007. On the other hand was the 6-3 Dustin Korte, who started in a Illinois high school championship state basketball game. And smack in the middle was the 5-9 Erik Barnes, who simply was and is strictly a golfer.

As a youngster he took up the sport and fell in love with it, became consumed with it. That love affair eventually brought him to Clarksville and Austin Peay. And “smack” is the word that attracted Kayden to Barnes. Despite being 130 pounds when he signed, Barnes always could hit it a long way, in fact, he was longer than Leaver, when the two were teammates.

“Usually my best players have been the athletes, guys who played multiple sports (in high school),” Kayden said. “But when I went to watch Erik as a high school junior at regionals at Ball State, two things really jumped out to me. One was his confidence level—he really had such great confidence in himself. And the second thing also sure jumped out—he was a guy who could hit it a long way—you can’t coach length.

“He had a lot of club head speed and he swung at it hard. He hit it everywhere but you could see he really wanted to do this. It was a matter of getting that swing under control. And he did.”

Barnes will join his former teammate Leaver as a member of the Austin Peay Athletics Hall of Fame, February 17th, 2018, in a 9:00am, breakfast ceremony. Later that night, Barnes, along with other 2017 Hall of Fame class inductees, will be introduced at halftime of the Governors basketball game against Jacksonville State.

A Marion, Ind., native, Barnes arrived in 2007 as that recruit Kayden hoped could provide ample support to Leaver, but also someone to build the program around in the future. He also was a guy who came to Division I golf with an extreme amount of self-assuredness, bordering on brashness.

“When Erik came down for his official visit, he told me someday he would play on the PGA someday,” Kayden said. “And he is close to backing it up. You just don’t see that type of confidence level in a 17-year-old—he had big goals.

“His confidence, his competitiveness, his will to win was so evident. He was someone who was a vocal leader, a guy, who was so sure of his skills. He wanted to win every tournament. I know there might have been some people didn’t like it, that maybe he came off a little too strong, but I always have appreciated his confidence.”

He certainly didn’t disappoint. As a freshman, he averaged 72.6 strokes per round (third lowest all-time at the time) and was named second-team All-OVC, OVC Freshman Golfer of the Year and to the All-Newcomer team. He recorded his first career Top 10 finish by taking second behind Leaver at the F&M APSU Intercollegiate, shooting a 210.

A year later, Barnes, undergoing some swing refinements, had trouble replicating his freshman season, especially during the fall. He still finished second on the team in scoring average (74.0) and saw 30 of his 33 rounds count. After a struggling fall, he began to regain form in the spring.

Barnes achieved season-best second-place finishes at the Diablo Grande Intercollegiate and the Middle Tennessee Aldila Intercollegiate with a three-round 214 (76-69-69). At the Arkansas State Indian Classic he tied his then career-low round (67) in the first round and fired a season-low, three-round 213 to help lead the Govs to victory.

That set up Barnes for a spectacular junior season, which saw him tie or set the APSU records for low 18-, 36- and 54-hole scores. It started in the fall. At the Xavier Invitational he tied the APSU single-round record (since broken) with a 64.

A week later he smashed a pair of APSU long-held marks. In the F&M Bank APSU Intercollegiate at the Links at Novadell, Barnes fired back-to-back 66s for a Governors record 132 for 54 holes. He followed that up with a 67 for his first career medalist honors. Barnes won the tournament by six shots, his 199 (66-66-67) the first sub-200 score by a Governors player in University history. He recorded par or better on 46 consecutive holes before a bogey on his 11th hole in the third round. Barnes finished the tournament with 19 birdies and two bogies.

He carried that momentum into the spring. In fact, in the season’s final regular-season tourney he shot a final-round 67 to surpass 10 golfers on the final day to earn medalist honors at the UK Bluegrass Invitational, a tourney comprised greatly of SEC teams, in Lexington, KY.

The Govs’ fourth-place finish, including Barnes’ medalist honors, served as a springboard at the OVC Championship, played in Muscle Shoals, AL. On the final day, the Governors rallied from nine shots down on the front nine to capture the league title by one stroke (877), shooting a 1-under 287 to edge Murray State—it was Kayden’s first OVC title as a coach. Barnes ended 11th in the tournament. He also was named first-team All-OVC and became the sixth Governor to earn OVC Golfer of the Year honors.

The Golf Govs, however, never could regain that magic during Barnes’ senior season. He earned All-OVC honors for a third time and his third-place OVC tourney finish allowed him to earn league all-tourney honors.

After Barnes graduated from APSU in 2010 with a degree in business administration, he turned professional a year later, but it wasn’t until 2012 he started gaining traction. He bounced around the National Golf Association (NGA) tour—formerly the Hooters Tour—for a couple of seasons, barely scraping by financially. In fact, he went in the hole—a $30,000 divot—trying to get the little dimpled white ball in the cup on a more consistent basis.

But momentum started to swing his way in 2014. Instead of heading north or to other parts of Florida, he had a different approach—he headed south to play in the PGA Tour LatinoAmerica. He gained a Top 10 finish in his first outing and claimed two other Top 10 finishes. In between tour stints in Latin America, he also joined the PGA Tour Canada, collecting two more Top 10 finishes.

After barely surviving his first two pro seasons, his successful third year had a lot of carry to it, allowing him to pursue his Web.com Tour card—it offered him the opportunity to participate in the tour school. He advanced to the tour school final stage by finishing 16th in the second stage. By ending 35th overall in the standings he obtained a provisional Web.com Tour card for 2015. A second-place finish in just his fifth Web.com Tourney, the Chile Classic, assured him a complete tour season.

In fact, his performance that summer allowed him to be chosen—representing the Web.com Tour—as a member of Team World, captained by golf legend Tom Watson, in the RBC Canada Cup.

But the last two seasons have not ended well for Barnes, both being derailed by injury. In 2016, it was his wrist and then this past season saw a back injury cut short his campaign, forcing him back to Q School.

However, last week’s trip to Arizona was Barnes’ first step back. His final round 64 pushed him up to 42nd place and guaranteed the first eight Web.com events of the 2018 season…And once again Barnes is inching closer to delivering on the promise he made to Kayden as a teenager.