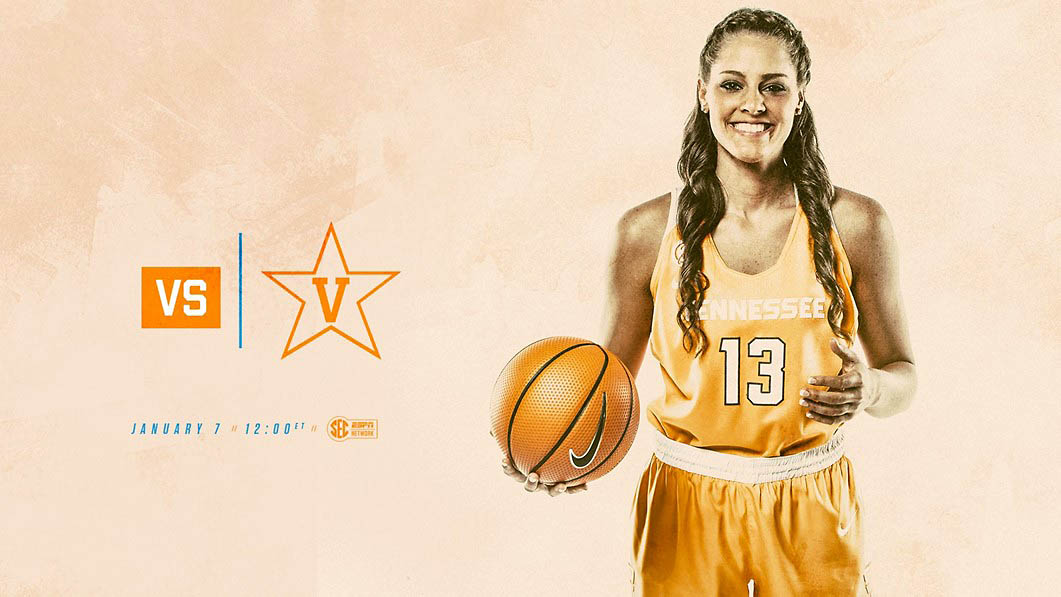 The Lady Vols and Commodores will meet for the 79th time overall and the 33rd time in Knoxville during the series.

Tennessee will be aiming to go 15-0 for only the fourth occasion in school history and for the first time during the Holly Warlick era. The last time Tennessee began a season 15-0, the Lady Vols extended the streak to 18 games before finally falling during the 2005-06 season en route to a 31-5 overall record and an Elite Eight finish. 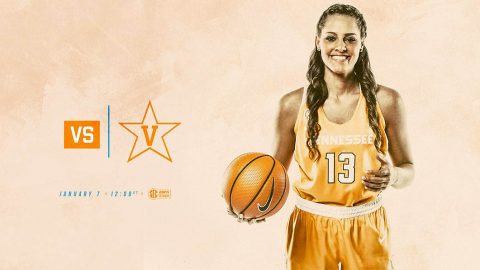 UT also will attempt to extend its home winning streak to 11 games, beginning the successful spree here with wins over Arkansas and Florida to close out the 2016-17 home slate.

The Lady Vols had to overcome a four-point deficit with 4:26 to go Thursday night to stay unbeaten, holding off upset-minded Auburn, 70-59, in Knoxville.

Vanderbilt comes to town on the heels of an 81-52 home loss to Florida on Thursday evening. The Commodores have lost two straight and six of their last eight. After opening 0-4, VU had rallied to win three of five before hitting the current rough patch.

Tiffany Greene (play-by-play) and LaChina Robinson (analyst) will describe the action for the Tennessee-Vanderbilt TV broadcast on the SEC Network.

During the Holly Warlick era, Tennessee is 62-20 in league games, making Warlick the top-ranked active SEC coach in terms of winning percentage in league play at .756 among coaches with at least one season at a school.

In only her sixth year as a head coach, Warlick already ranks fourth in total league wins among active SEC coaches and has won regular season titles in 2013 and 2015, and a tourney crown in 2014.

This is the 31st season that the Tennessee women’s and men’s basketball teams have called Thompson-Boling Arena home, and the Lady Vols own a 436-35 mark (.926) in the venue.

The Lady Vols have a 589-59 (.909) home record in contests played at Thompson-Boling Arena, Stokely Athletics Center and Alumni Gym.

Capacity at Thompson-Boling Arena is 21,678.

UT has led the nation in attendance 19 times in the past 26 years, finishing second the past three years after an 11-season run at No. 1.

UT is one of only four undefeated teams remaining in NCAA Division I basketball. The other squads are Connecticut, Louisville and Mississippi State.

Tennessee is one of only four SEC schools remaining unbeaten in league play. That list also includes LSU, Mississippi State and South Carolina.

The Big Orange women have won 12 of 14 games by double-digit margins, including the first two SEC contests. The largest victory margins include 43 vs. Central Arkansas , 53 vs. Alabama State, 62 vs. Troy, and 29 vs. Long Beach State.

Tennessee opened league play with a 14-point win at Kentucky, UT’s biggest margin of victory over the Cats in Lexington since 2008, and then beat Auburn by 11, 70-59.

UT has led every game this season at the half  except for a tie vs. Auburn (30-30) and has owned a double-digit advantage at the intermission in 10 of 14 contests (Wichita State, Marquette, Texas and Auburn are the exceptions).

Tennessee has outscored its opponents in the points-in-the-paint category in 11 of 14 games, averaging a 42.0 to 29.6 difference.

The Lady Vols are holding SEC opponents to only 54.0 points per contest and a .310 field goal percentage.

Tennessee has increased its free throw percentage to .791 in SEC play connecting on 34 of 43 attempts.

If The Season Ended Today

These all-time statistical rankings are listed on page 167-169 of the media guide.

The UT women are 240-60-1 all-time vs. four-year college teams from the Volunteer State.

The Lady Vols are a perfect 32-0 in Knoxville, 27-7 vs. the Commodores in Nashville, and 10-2 at neutral sites, with the latter being all postseason contests.

In the last 11 meetings in Nashville, Tennessee has an 8-3 record vs. Vandy, but has won three straight and four of its last five at Memorial Gymnasium.

Holly Warlick is 9-1 as head coach vs. Vanderbilt, including 5-0 in Knoxville and 4-1 in Nashville.

Tennessee is 7-1 during redshirt senior Mercedes Russell‘s time in Knoxville, while seniors Jaime Nared and Kortney Dunbar are 6-0 vs. the Commodores.

That 49-point total by Vandy was the lowest scored by the Commodores in Nashville in the UT series since VU tallied 27 in a 96-27 loss in the first meeting on January 18th, 1976.

UT’s victorious 57-point sum in the 2015 meeting in Nashville, meanwhile, was the lowest ever by the Lady Vols in the series.

The Last Meeting Between UT & VU

After a dominating first half by the Lady Vols, an early attempt at a second half comeback by Vanderbilt was not enough, as Tennessee beat the Commodores, 91-63, on January 22nd, 2017, at Thompson-Boling Arena.

Four Lady Vols (12-7, 3-3 SEC) had double-digit scoring outings with Diamond DeShields leading the way with 23 points to go along with four rebounds, three assists and a steal. Alexa Middleton posted 19 points and seven assists, while Jaime Nared and Mercedes Russell had 17 and 15 points, respectively.

Erin Whalen and Marqu’es Webb led the Commodores with 13 points each on the night, but Vanderbilt (10-10, 0-7 SEC) struggled to find its rhythm, shooting 40-percent from the field.

The Commodores enter on a two-game losing streak, dropping their first two league games, and have suffered setbacks in six of their last eight contests.

Vanderbilt has struggled with turnovers as well, committing 50 in two SEC games while dishing out only 19 assists.

Chelsie Hall, who averages 14.4 points for the season, has elevated her play in SEC action, averaging 17.5 ppg. thus far.

Rachel Bell’s effort has been consistent, averaging a team-leading 14.4 ppg. overall and 14.5 vs. SEC foes.

VU is coached by Stephanie White, who played at Purdue and who coached Lady Vol great Tamika Catchings while she was head coach of the Indian Fever.

Associate head coach Carolyn Peck, who played at Vanderbilt, was a member of Pat Summitt’s Tennessee staff from 1993 to 1995, working alongside UT’s (then assistant) Holly Warlick and current LSU assistant Mickie DeMoss.

UGA jumped out to a 22-9 lead after the opening quarter and closed with a 21-9 spree in the fourth stanza. The Commodores were outscored only 19-16 in the second period and 19-18 in the third.

Senior Jaime Nared recorded a double-double with 19 points and 11 rebounds to lead No. 7/7 Tennessee to a 70-59 victory over Auburn (10-4, 1-1 SEC) on Thursday night at Thompson-Boling Arena. The win snapped a seven-game win streak for the Tigers and moved Tennessee to 14-0 for only the fifth time in school history.

Freshman Evina Westbrook chipped in a career-high 18 points and a game-high six assists, while senior Mercedes Russell added 10 points and four blocks on the night for Tennessee as the Lady Vols improved to 8-0 at home this season.

Daisa Alexander paced Auburn in scoring with 16 points, while Tiffany Lewis and Janiah McKay each added 10.