Dallas, TX – Middle-aged couch potatoes may reduce or reverse the risk of heart failure [1] associated with years of sitting if they participate in two years of regular aerobic exercise training, according to a new study in the American Heart Association’s journal Circulation.

Study participants who adhered to the aerobic exercise regimen [2] had significant improvements in how their body used oxygen and had decreased cardiac stiffness after two years, both markers of a healthier heart. 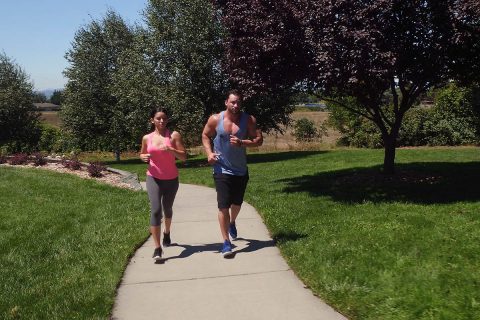 Two years of exercise training during middle age may reduce or reverse the cardiac consequences of a sedentary lifestyle.

Aerobic exercises are sustained activities, such as walking, swimming, running and others that strengthen the heart and other muscles and help the body use oxygen effectively.

“The key to a healthier heart in middle age is the right dose of exercise, at the right time in life,” said study author Benjamin D. Levine, M.D., lead author of the study and the founder and director of the Institute for Exercise and Environmental Medicine, a joint program between Texas Health Resources and UT Southwestern Medical Center Dallas, Texas.

“We found what we believe to be the optimal dose of the right kind of exercise, which is four to five times a week, and the ‘sweet spot’ in time, when the heart risk from a lifetime of sedentary behavior can be improved — which is late-middle age. The result was a reversal of decades of a sedentary lifestyle on the heart for most of the study participants,” he said.

The researchers analyzed the hearts of 53 adults ages 45-64 who were healthy but sedentary at the start of the study – meaning they tended to sit most of the time. Study participants received either two years of training, including high- and moderate-intensity aerobic exercise four or more days a week (exercise group), or they were assigned to a control group, which engaged in regular yoga, balance training and weight training three times a week for two years.

The exercise group committed to a progressive exercise program which monitored participants’ recorded heart rates. People in this group worked up to doing exercises, such as four-by-fours –4 sets of four minutes of exercise at 95 percent of their maximum heart rate, followed by three minutes of active recovery at 60 percent to 75 percent peak heart rate.

In this study, maximum heart rate was defined as the hardest a person could exercise and still complete the four-minute interval. Active recovery heart rate is the speed at which the heart beats after exercise.

Sedentary behaviors – such as sitting or reclining for long periods of time – increase the risk of the heart muscle shrinking and stiffening in late-middle age and increases heart failure risk. Previous studies have shown that elite athletes, who spent a lifetime doing high-intensity exercise, had significantly fewer effects of aging on the heart and blood vessels, according to Levine.

However, the six to seven days a week of intense exercise training that many elite athletes perform throughout their life isn’t a reality for many middle-aged adults, which led Levine and colleagues to study different exercise doses, including casual exercise at two to three days a week and “committed exercise” at four to five days a week.

“We found that exercising only two or three times a week didn’t do much to protect the heart against aging. But committed exercise four to five times a week was almost as effective at preventing sedentary heart aging as the more extreme exercise of elite athletes,” he said. “We’ve also found that the ‘sweet spot’ in life to get off the couch and start exercising is in late-middle age, when the heart still has plasticity.”

People need to make an exercise program part of their personal routine, just like they brush their teeth every day, according to Levine. “I recommend that people do four to five days a week of committed exercise as part of their goals in preserving their health,” he said.

The program, according to Levine, should be similar to the one studied, including at least one long session a week, (such as an hour of tennis, cycling, running, dancing, brisk walking, etc.); one high-intensity aerobic session, such as the four-by-four interval training described previously; two or three days a week of moderate intensity exercise, where exercisers break a sweat but can still carry on a conversation; and at least one weekly strength training session.

“That’s my prescription for life, and this study really reinforces that it has quite extraordinary effects on the structure and function of the heart and blood vessels,” he said.

One of the study’s limitations is the researchers selected volunteers who were willing and able to participate in an intensive exercise regimen, so results might not apply to the general adult population. Another potential limitation is that study participants were for the most part Caucasian, which questions whether these results would apply to other racial groups.

The National Institutes of Health funded the study.

[6] Common Artery Problems As You Age May Be Avoided or Delayed, Study Shows: https://news.heart.org/common-artery-problems-as-you-age-may-be-avoided-or-delayed-study-shows/