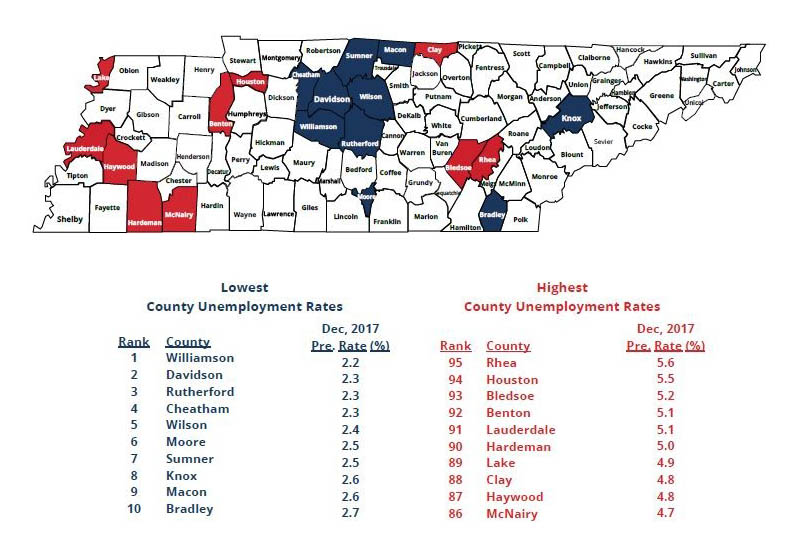 Nashville, TN – Tennessee County unemployment rates released by the Tennessee Department of Labor and Workforce Development (TDLWD) show unemployment remained below 5 percent in an overwhelming majority of the state’s 95 counties during December 2017.

Unemployment in Clarksville-Montgomery County dropped from 3.8 percent in November to 3.4 percent in December and is down 1.9 percent from December 2016’s unemployment rate of 5.3 percent. 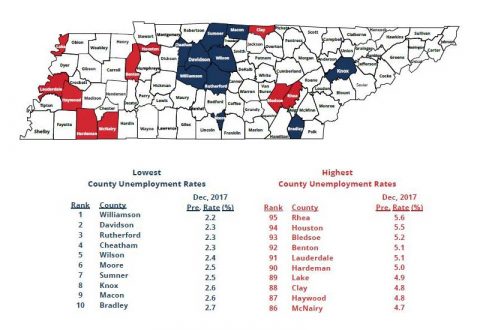 The latest statistics also highlight how each county had significantly lower unemployment compared to one year ago.

Eighty-nine counties experienced unemployment under 5 percent during the last month of the year.  Seventy-seven counties saw their rates decrease, including Williamson County, which had Tennessee’s lowest rate at 2.2 percent, a 0.3 percent drop from the previous month.  Davidson County’s rate of 2.3 percent was the second lowest in state and represents a 0.2 percent decrease from November.

The list of top ten counties with the lowest unemployment also includes Rutherford County, Cheatham County, Wilson County and Knox County, which each saw a decrease of 0.3 percent in December.  The rates in Sumner County and Moore County went down by 0.2 percent last month, while Macon County and Bradley County moved into the top ten.

“It’s great the counties with the lowest rates all experienced a decrease in unemployment during December,” TDLWD Commissioner Burns Phillips said.  “But Tennessee’s economic outlook is even more encouraging when you compare the year-to-year figures for every county in the state.”

Only seven counties saw their rates slightly increase during December, including Rhea County, which had the state’s highest unemployment rate at 5.6 percent.  Even with a 0.2 percent increase, Rhea County’s jobless number for December 2017 was down 3.3 percent from its December 2016 rate of 8.9 percent.

“We’ve made a tremendous amount of progress over the last 12 months,” Commissioner Phillips noted.  “But we are constantly working to make sure every Tennessean has the opportunity to earn a good wage, at a good job, so they can provide for their families.”

Tennessee’s statewide unemployment rate is the lowest among its neighboring states in the southeast and it is the 8th lowest in the entire nation.

The statewide unemployment rate is seasonally adjusted, while the county rates are not.  Seasonal adjustment is a statistical technique that eliminates the influences of weather, holidays, the opening and closing of schools and other recurring seasonal events from an economic times series.