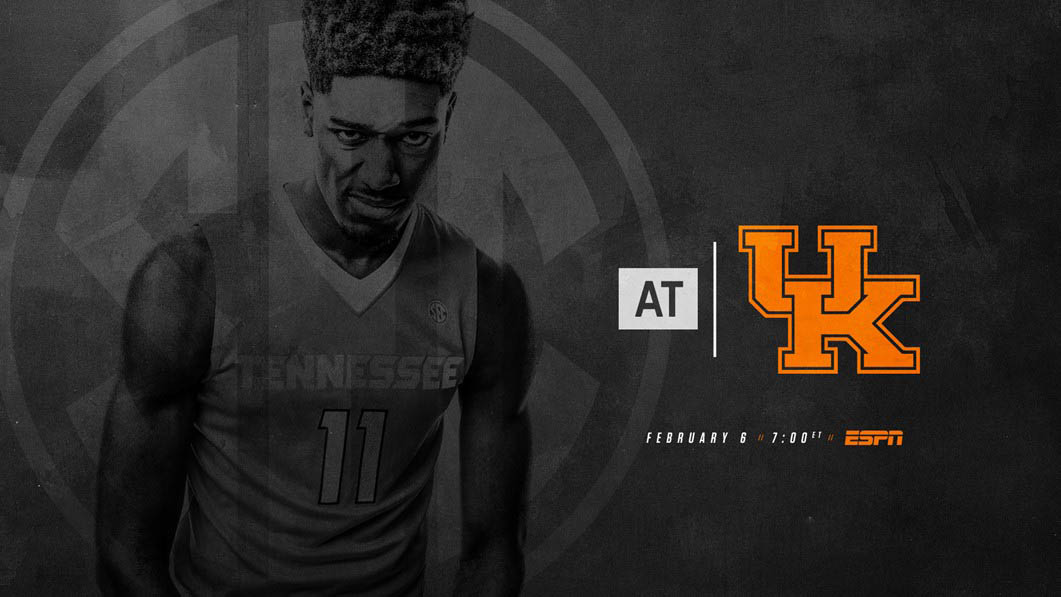 Lexington, KY – Playing its best ball of the season, 15th-ranked Tennessee heads to Rupp Arena on Tuesday night, February 6th for a showdown with rival Kentucky. The game is set to tip at 6:00pm CT and will be televised on ESPN for “Super Tuesday.”

The Vols (17-5, 7-3 SEC) enter the contest as winners of their last five games and eight of the last nine. During the stretch, defense has been the key for UT’s success. Tennessee has held its opponents to under 65 points in each of the last seven outings and now ranks 6th in defensive efficiency in the KenPom rankings. 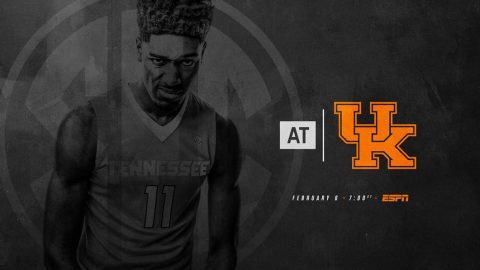 UT is coming off a 94-61 drubbing at home against Ole Miss.

Despite five scorers in double figures and blazing-hot shooting in the second half, the defense stole the show, forcing 17 turnovers by the Rebels behind 11 steals and seven blocks.

On Saturday, the Wildcats fell on the road at Missouri, 69-60. UK struggled to connect from beyond the arc, converting on just two of its 20 attempts from three.

After the matchup, the Vols head to Alabama for a game against the streaking Crimson Tide on Saturday at 5:00pm CT. After that, UT returns home to face South Carolina in a 8:00pm CT tip next Tuesday for one of three remaining games in Thompson-Boling Arena this season.

During its five-game win streak, Tennessee is allowing an just 58.5 ppg while boasting a +18.2 scoring margin.

Per KenPom.com, Tennessee rates in the national top 30 in both offensive (22nd) and defensive (6th) efficiency.

The Vols are rated No. 13 in the NCAA RPI and own the nation’s third-rated SOS, per KenPom.com.

Give Tennessee a six-game overall win streak (its longest since February 2013) and a five-game win streak in SEC play.

Stand as Tennessee’s fifth all-time victory over Kentucky at Rupp Arena. Give the Vols their first season sweep of Kentucky since the 1998-99 campaign.

John Calipari once again heads a strong Kentucky team, which was picked to win the SEC this year by the media during the preseason.

The Wildcats currently rank 16th in the latest RPI standings. With a 17-6 record entering the matchup, UK holds wins over ETSU, Harvard, Virginia Tech, Louisville, Georgia and at West Virginia this season.

After losing two of its previous three, Kentucky fought back from a 15-point halftime deficit on the road at No. 7 WVU to beat the Mountaineers, 83-76, as part of the Big 12/SEC Challenge on January 27th.

Freshman Kevin Knox, the team’s leading scorer on the season at 15.1 ppg, led the charge vs. West Virginia, with a career-high 34 points on 11-of-17 shooting.

Shai Gilgeous-Alexander is arguably Kentucky’s most versatile player, averaging 12.7 ppg, 4.4 apg, 3.6 rpg and 1.7 spg in 31 minutes of action per game.

The Wildcats enter Tuesday’s matchup coming off a loss at Missouri, 69-60. Kentucky struggled to connect from beyond the arc, converting on just two of its 20 attempts from three. Gilgeous-Alexander led the Wildcats with 15 points and six assists.

The Kentucky series is UT’s oldest and most-played among SEC opponents. The Vols and Wildcats first met on February 5th, 1910, and have clashed 223 times over the years.

It has been 10 years since the last time Tennessee came to Rupp Arena ranked higher than Kentucky. The third-ranked Vols lost to the unranked Wildcats, 72-66, at Rupp on January 22nd, 2008.

No program in college basketball has logged more wins over Kentucky than Tennessee (70).

Kentucky is one of only four SEC schools (along with Alabama, Arkansas and Missouri) to lead its all-time series against the Volunteers.

Tennessee has 14 all-time wins over the Wildcats at Thompson-Boling Arena, including three straight.

Admiral Schofield scored 20 points and recorded nine rebounds to lead the 23rd-ranked Tennessee Volunteers to a 76-65 victory over No. 17 Kentucky on January 6th, 2018, at a sold out Thompson-Boling Arena.

The Vols shot 54 percent from the field in the second half while using a strong defensive effort to outscore the Wildcats  in the final period, 47-28, and earn their first conference victory of the season.

Grant Williams stepped up offensively down the stretch, scoring 16 of his 18 points in the second half on 7-for-9 shooting.

UT was also fueled by great team play, as it recorded 23 assists on 25 made field goals, led by six assists from James Daniel III.

After going into halftime trailing by nine, the Vols went on multiple runs in the second half, including a 10-0 burst that lasted more than three minutes, to reclaim the lead and defeat Kentucky for the third consecutive year at Thompson-Boling Arena.

Kentucky was efficient throughout the first half, shooting 55 percent from the field and 4-for-8 from behind the 3-point arc. PJ Washington knocked down his first four shots and finished the period with 11 points to lead the Wildcats to a 37-29 advantage at the intermission.

UT stormed out of the gate in the second half, going on a quick 6-0 run highlighted by a Schofield breakaway dunk. The outburst continued with a Lamonté Turner 3-pointer three minutes in that put the Vols ahead for the first time since the 16:00 mark of the first half.

John Calipari is the league’s active leader in career wins, with 669. Rick Barnes is a close second with 652 victories to his credit.

Among all active Division I head coaches, Calipari and Barnes rank fifth and seventh, respectively, in total head coaching wins.

On Tuesday, John Calipari will coach his 23rd career game against the Vols. Among active college coaches, that stands as the third-most career meetings against Tennessee.

Vols Have Seven Wins vs. Calipari

Since UK coach John Calipari returned to the college game in 2000-01, Tennessee has dealt him seven losses. No team has more wins over Calipari-coached teams during that span.

Tennessee head coach Rick Barnes said that junior wing Admiral Schofield had his best game as Vol when UT defeated Kentucky on Jan. 6. That win started a streak of stellar play for Schofield.

In this year’s first meeting with Kentucky, Schofield totaled 20 points, nine rebounds, four assists, four steals and a block. In five career games vs. Kentucky, Schofield averages 13.4 points, 6.8 rebounds and 1.4 assists while shooting .500 from the field.

Excluding any postseason games, UT is on pace to total 533 assists during the regular season. That would stand as the fourth-highest single-season total in school history.

The Vols also are on pace to finish the regular season with 155 blocked shots. That would rank as the sixth-highest single-season total in school history.

During SEC play, junior wing Admiral Schofield ranks second in the league in 3-point percentage (.458) and fifth in rebounding (7.4 rpg) and tied for seventh in steals per game (1.4 spg).

Vols Coming Off Best Hal of Basketball This Season

Tennessee put on a clinic during the second half of its 94-61 rout of Ole Miss on Saturday.The Vols scored 59 points in the half, during which they missed their first two field goals before making 20 of their last 26 attempts from the floor. The Vols shot .714 as a team during the half.

The 59 points were UT’s most in a half since scoring  60 in the first half of a 114-75 season-opening win over Chattanooga on November 25th, 2008. Tennessee had 17 assists and just one turnovers during the half.

During the final 20 minutes vs. Ole Miss Saturday, the Vols averaged 1.84 points per possession.