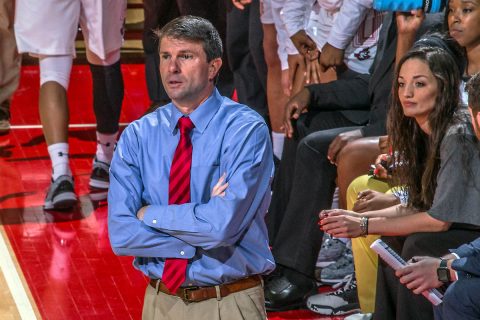 The Govs are coming off a split four-game road swing, where they earned wins at Southeast Missouri and Eastern Illinois.

Austin Peay (14-11, 7-7 OVC) is nestled comfortably in sixth place in the Ohio Valley Conference standings, working to move up the table in the final four games of their conference schedule.

The Governors are shooting 40.3 percent from the floor and averaging 64.8 points per game. The Govs are looking to even the season series with Tennessee Tech, after falling to the Golden Eagles 59-63, on the road January 11th.

Last time out, Keisha Gregory [1] carried Austin Peay with a career performance at Eastern Illinois, racking up 27 points, pulling down five rebounds and leading the team with three assists. The Govs pulled away from Eastern Illinois shooting above 55.0 percent in the second and fourth quarters, topping the Panthers 75-66 to wrap up their road trip.

The Governors are facing a familiar Golden Eagle squad that has four players averaging in double figures, shooting 39.2 percent from the floor. The Govs will focus on slowing down Tennessee Tech’s balanced offense and converting the Golden Eagle’s 18.5 turnovers per game into offensive production.

Series Structure
Austin Peay is 19-61 all time against Tennessee Tech, winning 10 matchups in Clarksville. The Govs dropped the previous meeting this season at the Eblen Center, 59-63 January 11th, and are looking to even the season series in their return home.

Struggles No More
The Governors have been unable to string together high percentage quarters, but those struggles are a thing of the past, as Austin Peay shot above 40.0 percent for six of the eight quarters last week.

Shaking Things Up.
Arielle Gonzalez-Varner [2] is averaging 16.5 minutes in conference play, and posted double digits for the first time in her career against Murray State (11) February 8th. As her minute count escalates, so does her impact on the offensive and defensive ends, Gonzalez-Varner has led the team in rebounds the last three games, pulling down 28 boards.

Be sure to follow all the Austin Peay women’s basketball action at LetsGoPeay.com and the official Facebook page of Austin Peay Athletics. In addition, live play-by-play coverage can be found on Twitter (@AustinPeayWBB) and live stats will be available at PeayStats.com. Saturday’s game can also be streamed for free on OVC Digital Network.