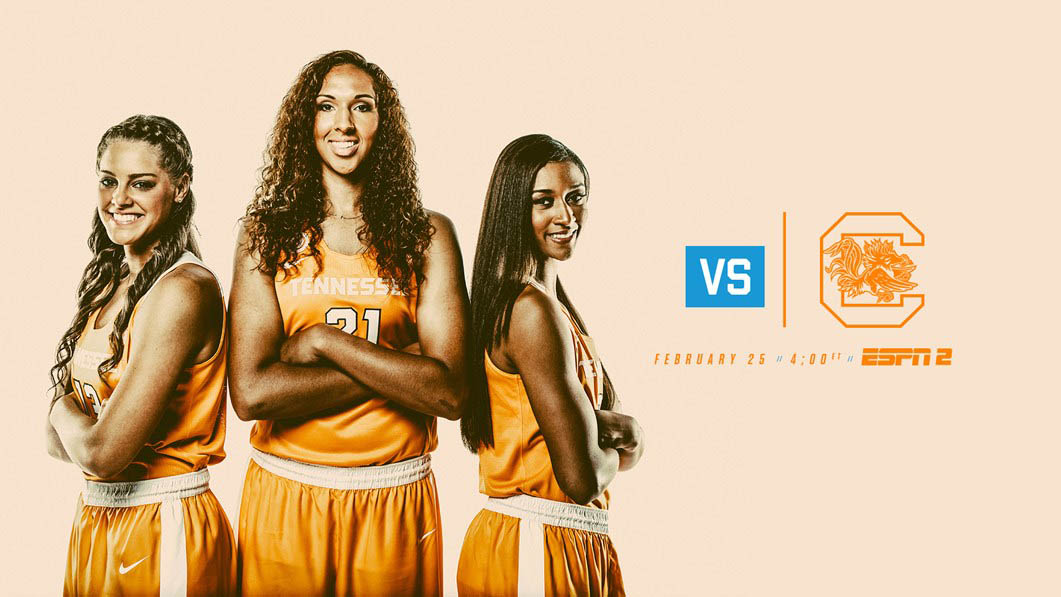 South Carolina sits in second place in the SEC standings, while the Lady Vols are tied for fifth with Texas A&M and LSU.

This marks the 56th all-time meeting in the series, with Tennessee leading, 49-6. The Lady Vols are seeking a season sweep of the Gamecocks and will try to extend their win streak vs. South Carolina to three games. 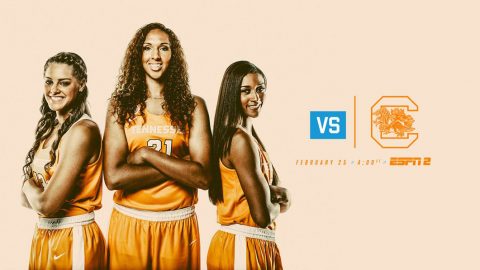 South Carolina star A’ja Wilson missed the first meeting this season due to an ankle injury but has returned to full strength.

Holly Warlick has forged a 4-3 record vs. Dawn Staley and the Gamecocks in her six seasons at the helm, owning a 1-1 record vs. USC in Knoxville, a 3-1 mark in Columbia and an 0-1 slate in SEC Tournament play. Staley also serves as coach of the U.S. Olympic women’s team.

Pam Ward (play-by-play) and Gail Goestenkors (analyst) will describe the action for the UT-South Carolina television broadcast on ESPN2.

Tennessee seniors Kortney Dunbar, Jaime Nared and Mercedes Russell, and manager Wyatt Hopper will be honored before the game, beginning at 2:40pm CT (14:00 on the countdown clock).

The Lady Vol senior class spans five seasons, including Mercedes Russell‘s freshman year of 2013-14 (she redshirted due to surgery in 2014-15).

The team won the 2017 Cancun Challenge Riviera Division title, a 2013 Junkanoo Jam championship and went 3-0 on a tour of Italy in 2015 while facing international competition.

The SEC Tournament in Nashville begins on Wednesday, February 28th, and runs through Sunday, March 4th.

By Sunday night, February 25th, the bracket will be set.

Selection Monday for the NCAA Women’s Tournament is on March 12 (7 p.m., ESPN).

UT is in the hunt to potentially host NCAA First and Second Round games March 16th-19th.

The Latest on Tennessee

Holly Warlick picked up her 150th career win as a head coach in the Florida game on Thursday night, coming in her 202nd career contest.

The 25 turnovers committed by Florida were the most by an opponent since ETSU had 35 in that 2015 game and the most by a league foe since Auburn had 25 on January 1st, 2012.

UT allowed only two points to Florida in the third quarter, the second fewest allowed in school history in a period and the fewest vs. an SEC foe.

The Lady Vols’ 24-2 blitz of UF in the third quarter was fueled by 14-0 and 10-0 runs that sandwiched the Gators’ lone points. The 14-0 burst was part of a total 18-0 streak that spanned the second and third stanzas.

The 14 second-half points by Florida tied for third fewest allowed by a Tennessee team.

Mercedes Russell needs a double-double to give her 14 for the season and tie for the most by a Lady Vol in a senior season. Glory Johnson, Lisa Harrison and Shelia Collins had 14 in their finals seasons at Tennessee.

The next double-double by Russell would be the 44th of her career, leaving her one shy of tying Candace Parker (45) for second all-time by a Lady Vol. Chamique Holdsclaw is first with 57.

Rennia Davis posted the seventh double-double of her rookie season vs. Florida, tying Karla Horton for sixth most of any UT freshman.

Three different Lady Vol rookies have been named SEC Freshman of the Week this season. Rennia Davis earned the honor twice (most recently on February 12th), while Evina Westbrook and Anastasia Hayes have once each.

Jaime Nared has twice been named the SEC Player of the Week this season.

Nared also was named the College Sports Madness National and SEC Player of the Week on two occasions this season.

Jaime Nared and Mercedes Russell have been included as members of the Wade Trophy Award Midseason Watch List and Citizen Naismith Trophy Late Season Watch List. Nared is among the top 10 for the Cheryl Miller Awards, while Nared is in the same company for the Lisa Leslie Award.

UT has led 24 of 28 games this season at the half. UT trailed Mississippi State by 13, Missouri by six and Alabama by five, and was tied vs. Auburn.

When UT has more fouls than its opponent, the Lady Vols are 2-4, losing to Texas A&M, Notre Dame, LSU and Missouri, and beating Marquette in OT and winning by 14 at Kentucky.

South Carolina had won the last three meetings, including twice in 2014-15, before Tennessee bounced back to win in Columbia last season and this season.

Tennessee is 5-2 vs. USC during the postseason and is 1-0 in overtime, taking a 79-73 extra-frame decision over the Gamecocks in the Palmetto State on February 15th, 1996.

Holly Warlick is 4-3 vs. the Gamecocks since taking over as head coach at UT prior to the 2012-13 season.

Three seasons ago, #10/9 Tennessee and #4/5 South Carolina met in the regular season finale in Knoxville, and the Lady Vols rolled to a 73-61 win on Senior Day for Meighan Simmons.

After defeating South Carolina, the regular season SEC champs at 14-2, the 13-3 Lady Vols went on to claim the 2014 SEC Tournament title in Duluth, GA.

The Lady Vols went 1-1 vs. South Carolina in 2011-12, suffering their first loss to the Gamecocks since January 23rd, 1980 (56-52 in Columbia), when UT head coach Holly Warlick was a senior point guard for the Big Orange.

Warlick’s 1979-80 UT squad bounced back to win two follow-up games vs. USC that season, and she finished her playing career 4-1 vs. the team from the Palmetto State.

Tennessee lost to South Carolina, 64-60, on February 2nd, 2012, in Knoxville, but rebounded to defeat USC in the 2012 SEC Tournament semifinals in Nashville, 74-58, en route to its 16th SEC postseason championship.

Last Meeting Between UT and USC

Jaime Nared added 21 points as the Lady Vols (16-1, 4-1 SEC) bounced back from their first loss of the season with a win over the defending national champions and their second consecutive victory in Columbia. UT was fueled by a balanced attack, with five different players reaching double figures.

Tyasha Harris put on an offensive display for South Carolina (14-3, 3-2 SEC) with a game-high 28 points and four assists. The Gamecocks were able to cut the deficit to four with under six minutes remaining in the fourth quarter, but Tennessee relied on strong defense and timely scoring to end the game on a 16-4 run.

UT’s freshman trio of Evina Westbrook, Rennia Davis and Anastasia Hayes had a strong showing in the second half, combining for 29 points over the final 20 minutes. Westbrook finished with 14 points, including 2-for-2 shooting from behind the arc, as well as a game-high five assists, while Davis and Hayes netted 11 points apiece.

Diamond DeShields scored 21 points and Bashaara Graves had a double-double in No. 24/RV Tennessee’s 62-56 loss to No. 3/2 South Carolina on February 15th, 2016, at Thompson-Boling Arena.

DeShields scored 15 of her 21 points in the second half and finished 7-of-17 on the night with four rebounds and two assists. Graves tallied 13 points and 10 boards, marking her sixth double-double of the season and the 27th of her career.

South Carolina’s A’Ja Wilson dominated the game with 25 points on 8-of-15 shooting from the floor and a 9-of-11 effort on free throws. Khadijah Sessions had 13 points and Tiffany Mitchell added 12 points.

Tennessee has some ties to USC via a member of the coaching staff and one of its players.

USC assistant Jolette Law spent the past five years on Holly Warlick‘s staff before joining the Gamecocks over the summer. Law is a South Carolina native from Florence.

Former Lady Vol Te’a Cooper transferred to South Carolina after last season. She sat out the 2016-17 campaign at Tennessee while rehabbing a knee injury suffered between her freshmen and would-be sophomore seasons.

The Gamecocks feature three active players scoring in double figures, led by A’ja Wilson (22.9). She is joined by Alexis Jennings (11.7) and Tyasha Harris (11.5).

Defending NCAA champion South Carolina is coached by Dawn Staley, who is 244-85 in her 10th year at the school. She is 416-165 in her 18th season overall as a head coach.

USC has won or shared a piece of the last four SEC titles and has claimed the last three tourney crowns.

It was senior night and the 6-foot-5 Wilson scored the first seven points of the game as the Gamecocks (23-5, 12-3 Southeastern Conference) never trailed.

The Lady Vols (22-6, 10-6 SEC) were led in scoring by Jaime Nared and Evina Westbrook with 13 each. UT had three other players in double figures, including Meme Jackson (11), Rennia Davis (11) and Anastasia Hayes (10). In a return to her home state, Davis added 10 rebounds to log her seventh career double-double.

Florida was led in scoring by Paulina Hersler, who ended the evening with 12 points and five rebounds.

A 24-2 blitz in the third quarter, fueled by a 14-0 spurt to open the second half, broke open an interesting game and allowed UT to cruise home with its 22nd win of the season.