The Governors will make the trek down to Covington, LA to compete in the New Orleans Invitational, with matches against New Orleans, Louisiana-Monroe, Houston Baptist, and fellow Ohio Valley Conference member, Jacksonville State. 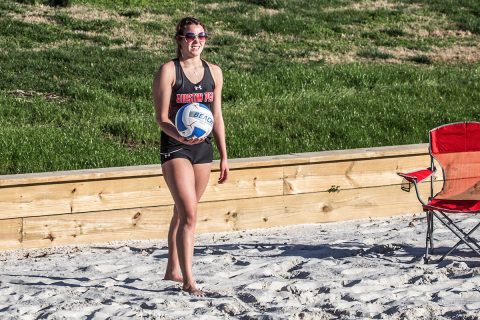 The Governors will take to the court for the first time 1:00pm, Friday, against the hosts, New Orleans.

After the New Orleans Invitational, the Govs will visit Spring Hill, AL for a faceoff with the Badgers. The Governors have previously faced Spring Hill when the Badgers played Austin Peay at last year’s inaugural APSU Beach Bash.

The Governors will round out their opening road trip at Georgia State, for the GSU Day of Duals, where Austin Peay will match up against the Panthers and Seahawks of UNC-Wilmington. The Govs are familiar with both squads, as Austin Peay made the trip to Atlanta last season in just their second tournament as a varsity club.

Gerig and Gable
Sophomore Ginny Gerig [2] and junior Cecily Gable [4] know what it takes to win, as both athletes pulled out three-set victories last season. Gerig was the only Gov to play every match at the number one pairing in Austin Peay’s first beach season.

Slay and Stitt
Veteran experience and freshman tenacity combine for this pair, as senior Ashley Slay [5] suits up for one final season at Austin Peay with freshman Chloe Stitt [8] prepped and ready for her first season as a Gov.

Korfhage and Darland
This Kentucky duo is set to bring energy and fight to the Governors’ beach season, with both Louisville native, Nina Korfhage [11], and Lexington native, Claire Darland [6], set for their Austin Peay beach volleyball debuts.

Taff and Thiess
Junior Kaylee Taff [3] and freshman Cori Theiss [10] are primed for their first appearance as a pair in New Orleans. Taff returns to the beach courts after strong opening season in 2017, winning back-to-back matches against UT Martin, April 12th and 19th.

Panning and Turner
Sophomore Jenna Panning [1] teams up with Haley Turner [9], a freshman talent hailing from Flagstaff, AR. Panning returns to the court for her second year after posting a .500 record in the number three pairing last season.