Knoxville, TN – Tennessee scored the game’s final nine points and survived a thrilling battle with Georgia to win a share of the SEC regular-season championship, 66-61.

The SEC title is UT’s first since the 2007-08 season. The Volunteers were picked in the preseason to finish 13th in the 14-team league.

With Tennessee leading 61-60 with less than a minute remaining, Kyle Alexander [1] stole a Georgia pass to give the Vols possession. On the other end of the court, Admiral Schofield [2] hit a mid-range jumper with 17 seconds left to push the Volunteers’ lead to three points, 64-61. 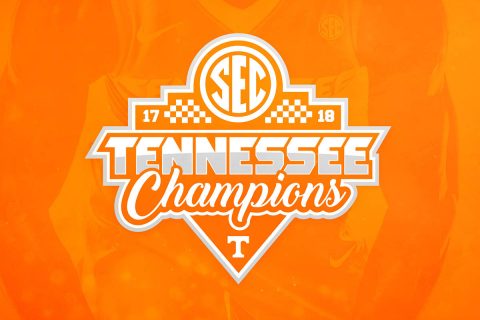 The 16th-ranked Vols’ 9-0 run to end the game was sparked by a Lamonte Turner [3] 3-pointer that cut a four-point Tennessee deficit with just over two minutes remaining down to one.

Sophomore Jordan Bowden [4] made two free throws a minute later to give the Vols the lead that they would not relinquish.

After trailing by eight points at halftime, Tennessee started the second half on 10-3 run to pull within one point. From there, the rest of the game was tightly contested, with neither team leading by more than four points. Georgia scored just 19 points in the second half after 42 in the first half.

Georgia took a 42-34 lead into the halftime break, behind 54 percent shooting from the field. The Bulldogs were also 7-for-12 (58 percent) from 3-point range in the opening stanza.

Schofield and Williams paced the Tennessee attack with 12 points apiece in the opening 20 minutes.

Today’s crowd of 22,237 was the 26th-largest in the history of Thompson-Boling Arena and UT’s largest home crowd since 2009 (22,326 vs. Gonzaga). Tennessee’s average home attendance now stands at 16,210 for the season, moving the Vols past Arkansas into eighth place nationally.

UT begins postseason play in SEC Tournament as the No. 2 seed. With a double-bye clinched, the Vols won’t play until Friday at 6:00pm CT (SEC Network). Tennessee will face the winner of Thursday’s game between seventh-seeded Mississippi State and 10th-seeded LSU.