Nashville, TN – The Nashville Predators defeated the Dallas Stars 2-0 at Bridgestone Arena tonight, setting a franchise record for consecutive wins at 9 in a row.

Ryan Hartman scored the game winner after two lackluster periods at 5:33 of the third period when his backhanded shot went “top shelf” over Dallas goalie, Kari Lehtonen, for the 1-0 lead.

That was all the Predators would need on this night against the Stars, but for good measure, Nick Bonino scored an empty netter with 14 seconds remaining in regulation for the 2-0 final. 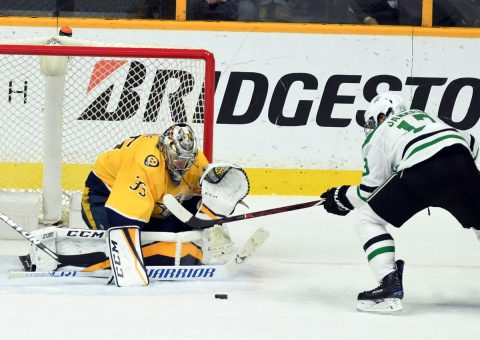 Tonight’s game marked the Smashville return of Mike Fisher who rejoined the team after a brief retirement.  It also marked the home debut of Ryan Hartman who was traded to the Predators from Chicago.

Nashville goalie Pekka Rinne was solid in net as usual, making 26 saves against Dallas and collected his seventh shutout of the season.  It’s his 50th shutout in his star studded NHL career and makes him perfect in his last seven games at 7-0-0.

The Stars are struggling to make the playoffs leading the L.A Kings by three points for the first wild card spot from the Western Conference.

Tonight’s win was the first of a four game home stand for the Predators, who will host the Anaheim Ducks on Thursday night at the Bridgestone Arena.