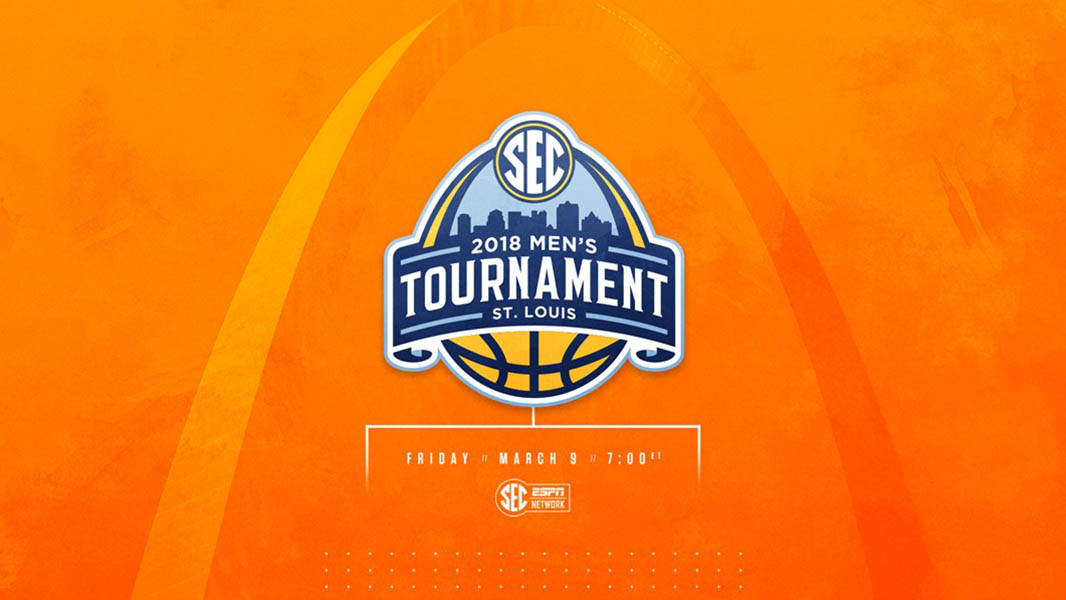 St. Louis, MO – The No. 2 seeded Tennessee men’s basketball team begins play in the SEC Tournament on Friday at Scottrade Center, facing the winner of the Mississippi State and LSU matchup on Thursday night. The game tips at 6:00pm CT and will be televised live on SEC Network and streamed online via WatchESPN.

The Volunteers (23-7, 13-5 SEC) claimed a share of the SEC Regular-Season Championship after being picked to finish 13th by select media during the preseason. 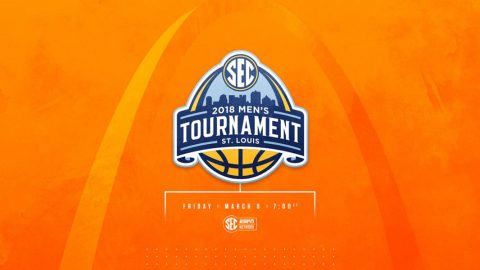 On Tuesday, UT swept the SEC’s postseason honors, as Rick Barnes won Coach of the Year, Grant Williams won Player of the Year and Lamonte Turner was Co-Sixth Man of the Year.

SEC Co-Player of the Week and Second-Team All-SEC honoree Admiral Schofield averaged 23.5 points and 5.0 rebounds last week while delivering from the field (17-34, .500) and the free-throw line (11-13, .846) in victories over Mississippi State and Georgia to clinch a share of the title. In Saturday’s game against UGA, Schofield led the Vols in scoring for the third game in a row with 23 points to help UT comeback from a double-digit deficit to defeat the Bulldogs.

Tennessee defeated both LSU and Mississippi State by more than 20 points in its lone meetings with the two teams. The Bulldogs own the No. 7 seed while the Tigers are the No. 10 seed in the tournament, but LSU defeated MSU in its regular-season finale on Saturday, 78-57. The winner of our game will advance to the semifinals and will face the No. 3 seeded Florida or the winner of Game 6 on Saturday.

Tennessee enters the SEC Tournament riding a league-best, four-game win streak during which the Vols are allowing only 59.2 points per game while boasting a +10.0 scoring margin.

In Tennessee’s most recent game—a 66-61 home win over Georgia last Saturday—the Vols held the Bulldogs to just three points in the final 8:29 of regulation. And UGA was scoreless over the last 3:10.

In their last two games, Tennessee has twice held opponents to 20 or fewer points in a half. Mississippi State managed just 20 points in the second half on February 27th, and Georgia was held to 19 second-half points in the regular-season finale March 3rd.

The Vols played a home-and-home series against five SEC teams this season: Kentucky, South Carolina, Vanderbilt, Ole Miss and Georgia. Prior to the season, Rick Barnes stressed the importance of those games to his coaching staff and said the Vols needed to go 8-2 in those contests. Tennessee was better than that—it went 9-1.

Picked to finish 13th in the SEC during the preseason, Tennessee enters the SEC Tournament as the SEC Champion and ranked 13th in the AP top 25 poll.

The Vols own the third-best SEC Tournament winning percentage among league schools, trailing only Kentucky (.839) and Alabama (.557).

UT has reached the championship game 10 times (tied for third-most among league schools), most recently in 2009 in Tampa.

This is the ninth time St. Louis has hosted the SEC Tournament and the first time the event has been contested west of the Mississippi River.

Tennessee’s all-time record in the state of Missouri is 2-6. The only cities in which the Vols have previously appeared are St. Louis (1-1) and Columbia (1-5).

Tennessee topped Kentucky, the third time UT beat the Wildcats that year, in the championship game of the 1979 SEC Tournament in Birmingham, AL. The Vols prevailed 75-69 in overtime on March 3rd, 1979.

Former All-American Howard Wood has been selected as Tennessee’s Allstate SEC Basketball Legend and will be recognized by SEC Commissioner Greg Sankey at midcourt during halftime of UT’s SEC Tournament opener Friday.

Wood starred in the Tennessee frontcourt for head coach Don DeVoe from 1978-81. A powerful but undersized center—he was 6-7, 235 during his career as a Vol—he was a member of Tennessee’s 1979 SEC Tournament championship team and was a second-team All-American and first-team All-SEC selection as a senior in 1981.

He was selected by the Utah Jazz in the second round of the 1981 NBA Draft and enjoyed a long and successful professional playing career—with many outstanding seasons spent playing in Spain.

Tennessee Was Picked 13th in SEC

SEC Champion Tennessee was predicted to finish 13th in the 2018 SEC race by an SEC and national media voting panel. The Volunteers also were picked 13th last season before posting an 8-10 SEC record to finish ninth.

The Vols have outperformed their preseason SEC projection every season under coach Rick Barnes.

Only Kentucky (48) has more SEC regular-season titles than Tennessee (10).

SEC Coach of the Year Rick Barnes has captured his fourth regular-season conference crown as a head coach.

In addition to landing two All-SEC performers, Tennessee swept Coach of the Year, Player of the Year and Sixth Man of the Year when the SEC coaches’ postseason awards were announced March 6th.

And Rick Barnes became the fifth UT head coach to be named the SEC Coach of the Year. Barnes, Ray Mears (twice), Don DeVoe (three times), Jerry Green and Bruce Pearl (twice) have combined to win the award nine times with the Vols.

This is one of only six Tennessee teams to win at least 23 games in a single season, and there’s plenty more basketball left to be played.

In 31 seasons as a Division I head coach, Rick Barnes has now led his teams to 20 or more wins 20 times.

With this month’s impending NCAA Tournament appearance, Rick Barnes will have guided four different programs to a total of 23 berths in The Big Dance. He led Providence and Clemson to three berths each before guiding Texas to 16 tournament appearances.

In Tennessee’s 108-year hardwood history, the Volunteers have made just 20 previous NCAA Tournament appearances. Barnes will become just the 13th head coach ever to lead four different programs to the Division I NCAA Tournament (and one of seven who are active