Lieutenant Colonel James Yastrzemsky, commander of 6-101st GSAB, came up with the idea for the exercise as a way to develop his junior officers. Yastrzemsky said it parallels what the command team is doing at the division level.

“We’ve put a significant amount of rigor into leader development over the past few years,” he said. “[This ensures] junior officers are better prepared to assume the guidon at their next assignment as company commanders.”

The lieutenants were partnered with a noncommissioned officer or warrant officer, and the teams were integrated from throughout the battalion’s seven companies.

Creating these teams creates an understanding of the different roles and how they support each other.

The junior officer professional development exercise began with an air assault obstacle course followed by rappelling down the tower at The Sabalauski Air Assault School.

Events included a M17 pistol/M4 rifle range, during which firers were timed while engaging multiple targets and navigating to various firing positions. 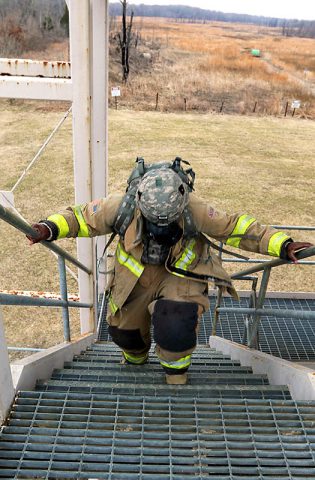 The range was created and supervised by Capt. Justin Smith, the battalion’s intelligence officer, and an elite competitive shooter and instructor.

Smith gave participants a two-hour familiarization class with the M17 pistol a day prior to the range event.

The event began with an unloaded pistol positioned at the starting point, with magazines at various points along the first half of the course. Following engaging targets with the pistol, the weapon was cleared, and the firer secured a pre-staged M4 rifle and proceeded to engage the remaining targets.

“I get a lot of satisfaction in knowing that the participants got solid firearms training out of the event,” Smith said. “Hopefully, events such as these will raise awareness on Fort Campbell as to the value of, and opportunities in, recreational shooting.”

Following the range, the focus began to turn toward recognizing service to country and paying homage to the 101st Abn. Div.’s history and legacy.

To commemorate almost 17 years of war and conflicts, and to reinforce the enduring partnerships between the military and civil servants, teams participated in a September 11th Memorial Tower relay race.

Teammates took turns donning firefighting equipment provide by the Fort Campbell Fire Department, and raced up and down a multilevel tower, competing for the fastest cumulative time for their team.

“This was not just about honing our warfighting skills, but reminding our Soldiers of why we fight,” Yastrzemsky said. “It truly is a team effort, which is critical to ensure our homeland’s safety and security in the post-9/11 era.”

Having conducted SERE training earlier in the day, in collaboration with 5th Special Forces Group, many participants bedded down for the night after viewing an episode of “Band of Brothers,” believing they were flying to SERE school at Fort Rucker the following day.

The next morning, joined by company command teams and primary staff, participants loaded onto helicopters for their next rendezvous.

Rather than landing at Fort Rucker as expected, the group exited the helicopters and found themselves at the base of Currahee Mountain, that is featured in “Band of Brothers” as the training site of the World War II-era paratroopers of the 101st Abn. Div., formed at nearby Toccoa, Georgia. The Soldiers also toured a museum and the local community.

“We visited with veterans of the 101st, and that is paying homage not only to our legacy of 75 years of excellence, in the 101st Airborne, but it is also paying homage to why we exist as an aviation fighting force that is to support our ground force,” Yastrzemsky said.

Captain Kyle Ulses, assistant chief of operations, 6-101st GSAB, and the officer-in-charge of the training exercise, was a participant at last year’s inaugural event.

For Ulses, the highlight of this year’s training exercise was the trip to Currahee Mountain and he pointed out that it was a team effort to make it possible.

“I am very happy we were able to work with B Company who transported us down there and the locals down there in Toccoa to [help] get the event planned out,” he said.

Ulses also noted the officers from each of the companies, who served as officers in charge for several of the individual events, during the exercise.

“They did amazing and I could not go without saying thanks to them for their hard work,” he said.

This training event was not only a professional development, it also was a competition and the accumulation of points started before the event even began.

The junior officers worked throughout the year accomplishing leadership and career progression tasks such as running a weapons range, planning a training event and becoming a pilot in command. As these tasks were checked off, each junior officer earned points and the training exercise served as the final tasks to determine an overall individual winner.

The title of Shadow Warrior was earned by 1st Lt. Taylor Rammrath, a Black Hawk helicopter pilot and platoon leader from A Company, 6-101st GSAB.

Rammrath values the team-building aspect of the culminating training exercise and the opportunity to get to know other members of the battalion.

“We’re building one team as we prepare for our next rendezvous with destiny downrange,” he said. “We had the opportunity to develop bonds with our brothers and sisters on the left and right of us through rigorous exercises, as well as some fun events. It allowed us to grow closer and to learn more about each other.”

Rammrath welcomed the opportunity to learn more about the history of the 101st Airborne Division, during the trip to Currahee Mountain.