Myrtle Beach, SC – Both on the track and in the field, Austin Peay State University wrapped up a solid opening weekend at the Coastal Carolina Invitational, Saturday.

The biggest showing of the day belonged to freshman Sabrina Richman [1], who won the 400m dash with a 56.37 mark—a mark that would have put her comfortably among the league’s top-eight last season—and followed it up later in the meet with a third-place, 25.50 mark in the 200m. 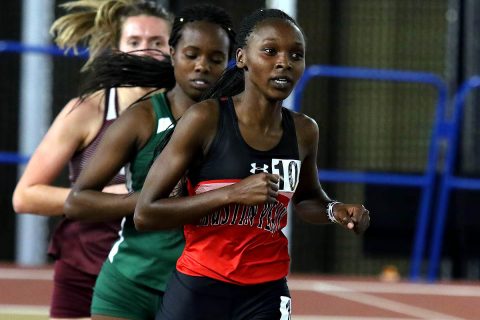 Junior Nia Gibbs-Francis [6] got the outdoor portion of her campaign off to a solid start, placing sixth at 1.60m (5-3.0); her height was equal to that of the runner-up finishers, although she required more attempts to hit the mark.

In her season debut, Maya Perry-Grimes [7] proved to be worth the wait for the Govs. The 2017 OVC Indoor Track and Field Freshman of the Year, who missed all of last outdoor season, was runner-up in the triple jump in her outdoor debut as a Gov, hitting 12.42m (40-9.00), a mark that would’ve put her near the top of the OVC a year ago.

“We know Maya has that kind of ability,” said Austin Peay head coach Doug Molnar [8]. “She’s shown it before. She will give us a big boost once we hit conference. Sabrina did a great job in the 400m. Then come back and led a nice trio in the 200m. That was good to see that group get off to a good start. Emma and Caroline came back today and had solid efforts for the second day in a row. Denia Hill-Tate [5] continues to grow eah meet. She finishes 9th in shot and comes back to finished third with a PR in the hurdles. She is going to be a force when it’s all said and done.”

The Govs will take the week off, returning to classes following Spring Break, before resurfacing at the Vanderbilt Black and Gold in Nashville, March 23rd-24th.