The Governors (11-7), winners of their last six games, will open play, 10:00am, Friday versus Bucknell, followed by a 2:30pm matchup with classic host Mercer. 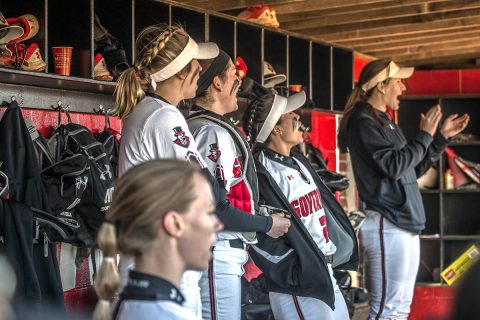 On Saturday, APSU plays at 9:00am, in a rematch against Bucknell and a 11:15am contest versus Rutgers to follow. Finally, the classic concludes on Sunday for APSU with a 12:15pm contest versus Mercer.

Leading the Govs offense heading into the weekend is third baseman Danielle Liermann [1], a week removed from being named Ohio Valley Conference Player of the Week, and her .472 batting average, including seven doubles, nine home runs and 29 RBIs.

Outfielders Kacy Acree [2] and Bailey Shorter are also batting over .300 this season, with Acree batting .349, including five doubles, three home runs and 13 RBI. Bailey Shorter [3] is batting .302, with three doubles and a home run.

Coming in just under the .300 mark are outfielder Natalie Schilling [4] and pitcher/outfielder Morgan Rackel [5], who are both hitting at a .298 clip so far this season – with Schilling leading the team in runs scored (21) and stolen bases (13), while Rackel has four doubles and a home run.

In the circle, the Govs have three pitchers that have picked up wins this season, led by Rackel’s 6-2 record, including a 1.54 ERA and 73 strikeouts in 59 innings of work. She has also gone 21 straight innings without giving up a run.

Bucknell
The Bison are 7-12 this season after dropping two games at nationally-ranked Georgia on Wednesday and are currently riding a six-game losing streak. Offensively, Bucknell is led by Lauren Hadley’s .300 batting average, while Raeanne Geffert tops the Bison pitching staff with a 3-4 record, a 3.25 ERA and 38 k’s in 51.2 innings pitched.

Rutgers
The Scarlet Knights are 13-11 this season after winning their last three games, including a 15-inning marathon at Florida Atlantic on Wednesday. Rebecca Hall leads Rutgers offensive, coming in hitting at a .402 clip, which includes seven doubles, six triples, three home runs and 26 RBIs. In the circle, Whitney Jones leads the Scarlet Knights with a 6-4 record and a 3.38 ERA.

Mercer
The Bears come in with an impressive 16-8 record, but they have lost three of their last four games – including two to OVC member Belmont. Offensively, the Bears have four players hitting above .300, led by Megan Lane’s .354 average, including five doubles, three home runs and 18 RBIs. In the circle, Megan Bilgri tops the Mercer pitching staff with a 6-3 record, while posting a 2.76 ERA.

Five different Governors have picked up game-winning hits this season.

This weekend’s tournament is the fifth time in the program’s history the Govs have played in a tournament hosted by Mercer, joining the 2002, 2006, 2007 and 2008 seasons.

Danielle Liermann [1] is the only Governor to reach base in all 18 games this season. She has also reached base in 20 straight games overall, dating back to last year, the third longest such streak by an APSU player since 2000.

The Mercer Bears Classic will mark the 17th time in their history that the Govs will have played in a tournament in the state of Georgia.