The Govs (15-8) open the weekend with a noon Friday doubleheader at Morehead State followed by a noon Sunday twinbill at Eastern Kentucky to wrap-up the weekend’s action. 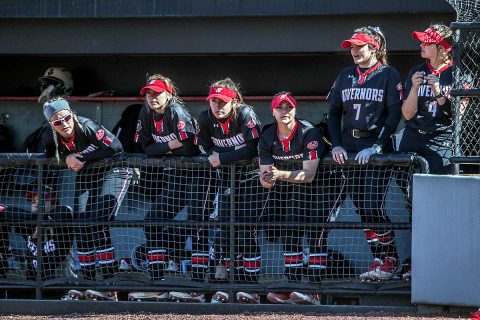 It will be the fifth time the Govs have opened conference play versus Eagles since the OVC started sponsoring softball as a conference sport back in 1994 and the third time APSU has starting OVC play at Morehead State.

The two series versus Morehead State and Eastern Kentucky are the fourth- and fifth-most played all-time in Austin Peay’s history, with the Govs having faced the Eagles 85 times — dating back to their first meeting on April 6th, 1986 — and hold an overall record of 36-48-1 in the series. The series versus the Colonels has seen 74 previous contests, dating back to April 3rd, 1993, with APSU’s record versus EKU standing at 15-59 all-time.

Leading the Govs offense heading into the matchups is junior third baseman Danielle Liermann [1], who is hitting at a .412 clip this season after 23 games, including a team-high 10 home runs and 30 RBIs.

Freshman outfielder Bailey Shorter, after batting .500 last weekend at the Mercer Bears Classic, as seen her average jump to .356 this season.

Junior pitcher/outfielder Morgan Rackel is the final Gov to enter the matchup hitting over .300, coming in at .306, with three home runs and 13 RBI.

Coming in just under the .300 mark are junior outfielders Natalie Schilling [2] and Kacy Acree [3], who are hitting .297 and 295 respectively, with Schilling leading the team with 25 runs scored and 18 stolen bases; while Acree is second on the team in home runs (5) and RBIs (18).

In the circle, the Govs have three pitcher that have posted .500-or-better records, led by Rackel’s 7-3 mark, which includes a 1.65 ERA and 85 strikeouts in 72 innings of work.

Rounding out the trio and coming off shutouts in her last two starts is sophomore Kelsey Gross [5], who sports a 3-3 record, with a 4.20 ERA and 22 k’s.

Morehead State
The Eagles come into Friday’s games with a 16-6 overall record, including going 3-2 in a pair of home tournaments the past two weeks.

In the circle, the Eagles are led by left-hander Chelsea McManaway, who sports an impressive 11-2 win-loss mark, with a 1.70 ERA and 113 strikeouts in 86.2 innings of work.

Eastern Kentucky
The Colonels come into the weekend with a 17-10 record after dropping three of four game last weekend at the Houston Round Robin and will play a doubleheader versus Murray State on Friday.

In the circle, Mollie Paulick leads the Colonels pitching staff with a 6-4 mark and a 2.64 ERA, with 58 strikeouts in 63.2 innings pitched.

Kelly Mardones [4] is the current co-OVC Pitcher of the Week.

Austin Peay is ranked 115th in the first NCAA RPI rankings of 2018 (March 18th), the highest ranking for the Govs at any point in their history.