Clarksville, TN – A midseason matchup between the top two teams in the Ohio Valley Conference will unfold this weekend when Austin Peay’s baseball team travels to Tennessee Tech for a three-game series, Friday-Sunday, at Bush Stadium in Cookeville, Tennessee.

Due to inclement weather forecast this weekend, the series opener has been moved to a 1:00pm, Friday start. 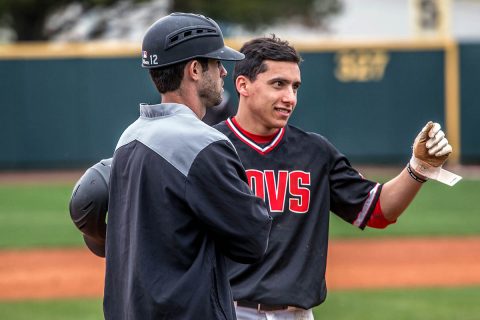 As of Thursday night, Game 2 is scheduled for a 2:00pm, Saturday start while the finale is slated for a 1:00pm, Sunday first pitch.

Austin Peay and Tennessee Tech are tied atop the OVC standings at 5-1 after the first two conference weekends. In addition, the Govs (No. 44) and Golden Eagles (No. 57) are both among the Top 60 in the NCAA’s RPI ranking entering the weekend set.

Kicking off the series, the opening game’s pitching matchup also will feature two of the league’s top hurlers with APSU’s Michael Costanzo [1] squaring off against TTU’s Travis Moths. Costanzo and Moths are the only two OVC pitchers with four wins this season, both also winning their first two OVC starts.

Austin Peay (14-8) will continue its current five-game road trip with this weekend’s action, traveling to Cookeville after splitting a two-game series at Kansas State. The Govs have won four of their last five, with their offense clicking on all cylinders – batting .359 and averaging 10.2 runs per game during the stretch.

Tennessee Tech (15-5) will carry a six-game win streak into the weekend and boasts one of the nation’s top offenses. The Golden Eagles lead all Division I teams in batting average (.360), home runs per game (2.2) and runs scored per game (11.2). Impressively, TTU has seven hitters ranked among the OVC’s Top 20 in batting average near the season’s halfway point.

With 22 games in the book, Austin Peay is ranked No. 44 in the NCAA’s March 22 RPI rankings and are 67th in overall win percentage. The Govs have recorded six or more walks 13 times this season and they rank fifth nationally with 132 base on balls (6.20 per game). Austin Peay also is ranked among the nation’s Top 50 in doubles per game (2.32, 22nd) and scoring (7.3 runs per game, 32nd) entering the week.

Shortstop Garrett Kueber [2] has 10 hits (.667 BA) and nine RBI in the Govs’ last three games, including back-to-back four-hit outings, and has reached base safely in all 22 games this season. Second baseman Garrett Giovannelli [3] brings an eight-game hit streak into the weekend, with nine hits (.450 BA) and four doubles in his last four games; he also owns a 28-game reached base safely streak that dates back to last season.

Third baseman Malcolm Tipler [4] had five hits (.625 BA) and the Game 2-winning RBI in the Kansas State series; extending his hit streak to six games. Andrew Flaherty [5] was held hitless in both games at Kansas State, the first time this season he has been held hitless in back-to-back games.

Center fielder Imani Willis [6] has two grand slams this season, both coming since he rejoined the starting lineup February 23rd, and leads the Govs with a .500 batting average and .625 on-base percentage in OVC play. Catcher David Martinez [7]‘ has reached base safely in each of his last five starts, batting .267 with four RBI in those games.

Outfielder Aaron Campbell [11] has started three of the last four games in right field and has two hits and four walks in those games. Nick Walker [12] has five multi-hit contests since March 3 (11 games) and leads the Govs in slugging percentage (.567) with eight extra base hits this season. Parker Phillips [13] returned to the starting lineup for both games of the Kansas State series and had a hit in each game.

The 2018 Govs offense is a collectively young group with only 15 years of Division I experience between the 20 available position players entering the season. Austin Peay has seen 16 different players make a start in the batting order so far this season and utilized a different batting order in every game this season.

Pucheu is 63rd nationally in victories (3) and 92nd in total strikeouts (34). APSU has not named a probable starter for the series finale. Right-hander Brandon Vial [15] and lefty Josh Rye [16] have combined to start the previous five weekend finales and are a combined 1-1 with a 6.43 ERA.

After the trip to Cookeville, Austin Peay returns home for a quiet week that contains no midweek contest due to the upcoming Easter holiday. The Govs return to action when they host rival Southeast Missouri in a Thursday-Saturday OVC series.