The Govs enter the matchup versus the Redhawks with a 21-10 overall record, including a 5-1 OVC mark, after edging Tennessee Chattanooga, 1-0, on the road, Wednesday, while SEMO stands at 19-11 and 3-1 in OVC play — before a single game at Southern Illinois, Thursday. 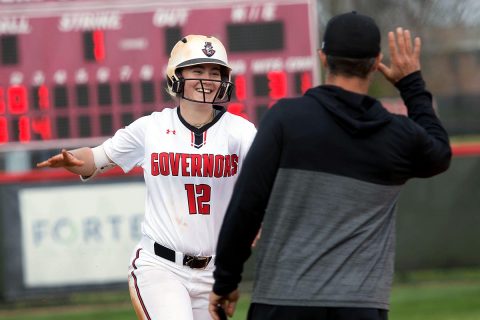 The series versus SEMO is the third-most played in Govs history, with Friday’s games being the 91st and 92nd all-time in the series dating back to their first meeting, March 3rd, 1989, in Clarksville. The Govs trail in the all-time series 69-21.

Leading the Govs’ offense attack heading into the matchup is junior third baseman — and current Ohio Valley Conference Player of the Week — Danielle Liermann [1], who is hitting at a .402 clip this season, including a team- and OVC-high 13 home runs, to go along with 36 RBIs.

Freshman outfielder Bailey Shorter [2] and junior pitcher/outfielder Morgan Rackel [3] are the other current Govs hitting over .300 on the season, with Shorter coming in at .333, including five doubles and two home runs. Meanwhile, Rackel is batting .302, with four doubles, five home runs and 19 RBIs. Junior outfielder Kacy Acree [4] (.294, 5 HR, 20 RBI) comes in hitting just under the .300 mark this season.

About the Southeast Missouri Redhawks

Prior to its game at Southern Illinois on Thursday, Southeast Missouri comes into Friday’s doubleheader having won four of its last five games, including wins versus defending OVC champion Jacksonville State and Southeastern Conference member Missouri.

In the circle, the Redhawks are led by Madeline Krumrey’s 10-3 record, which includes a 3.70 ERA and 57 strikeouts in 83.1 innings pitched.

Sophomore pitcher Kelsey Gross [6] enters the weekend with a current string of 23.2 innings pitched without giving up a run.

The save earned by junior Morgan Rackel versus Tennessee Chattanooga with the fourth of the season for the Govs, tying for the second-most single-season saves by a Governors pitching staff and trailing only the 2002 team, who recorded five saves.

The next win by the Govs will move them into sixth-place alone for most single-season wins in program history.

Austin Peay needs one most stolen base to set a school record for single-season steals. The Govs currently have 57 stolen bases this season.

With Kelsey Gross [6] improving her record to 4-3 after the Tennessee Chattanooga win, it marks just the second time in school history the Govs will have had three pitchers on their staff with winning records at any point during the same season, joining the 1998 team.