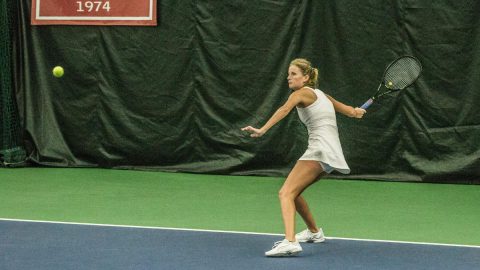 The Govs (8-6, 4-1 OVC) have won seven of their past eight matches and are tied for third in the OVC standings, a single game behind Murray State and Eastern Kentucky.

The top of the order has been nothing short of spectacular for the Govs, as Lidia Yanes Garcia [1] has compiled a 13-1 overall record at singles, including a perfect 13-0 at No. 1 singles.

The Govs have also been heavily reliant on the play of their German duo, Helena Kuppig [2] and Fabienne Schmidt [3], in singles. Both players have an 11-3 overall record in singles matches this spring, with Kuppig being 5-0 in OVC singles play.

The Govs will also host their senior day after the men’s match at 10:00a, but before the start of the women’s match Saturday. The lone senior for the women is Brittney Covington [4]. Covington has put together one of her best seasons in singles play, going 10-10 dating back to the fall season as well as compiling a 3-2 mark in OVC singles play this spring.

SIUE (0-16, 0-5 OVC) has surprisingly not won a match this season. The Cougars are the two-time defending OVC Champions and returned three players from last year’s title-winning team. In conference play, however, the Cougars have had a few matches where they only fielded five players. Yanes Garcia is undefeated in singles play against SIUE opponents, winning both of her singles matches the past two meetings.

Eastern Illinois (10-10, 4-1 OVC) is currently tied with the Govs for third place in the OVC. The Panthers have won their last four of five matches and boast this week’s OVC Player of the Week in Stella Cliffe. However, numerous Govs have experienced success against EIU. Ana Albertson [5] is undefeated in singles and doubles against the Panthers, while the twin sister duo of Lidia and Claudia Yanes Garcia [6] are both undefeated in singles against Panther opponents.