Clarksville, TN – Local Predators fans are invited to join their friends and neighbors at a giant community viewing party to cheer on goalie Pekka Rinne, captain Roman Josi and the amazing Nashville Predators as they begin the 2018 Stanley Cup Playoffs and their quest for the NHL Championship. 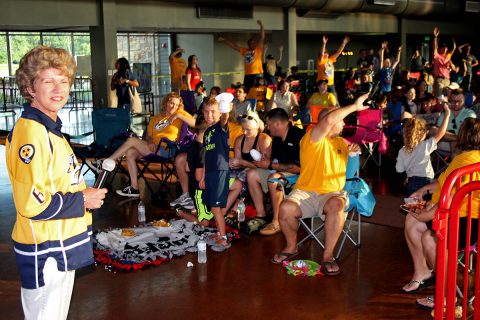 Other viewing party dates and times will be announced after early game results are known.

“Last year’s Predators viewing parties were a great success, and the City of Clarksville is excited to get the NHL Playoffs under way in similar style this season,” Clarksville Mayor Kim McMillan said. “We invite everyone to show their Predators pride and turn out Thursday evening for another round of Stanley Cup excitement, right here with our friends and neighbors in Clarksville.”

The Clarksville Parks and Recreation Department and CDE Lightband will stream the games on two huge screens, and more TVs will be placed throughout the Events Center. Food trucks and beverage vendors will offer snacks, beer and soft drinks, and give-away fan gear will be distributed, completing Clarksville’s own version of the Smashville experience.

All of Middle Tennessee is rooting on the red-hot Predators, who already have made history this season by winning a Central Division title, a regular-season Western Conference crown, and the Presidents’ Trophy as the League’s top point-getter. The excitement follows the Predators exciting 2017 run to the Stanley Cup Finals, where they fell in six games to the Pittsburgh Penguins.

Doors to the Wilma Rudolph Events Center will open at 7:00pm and game broadcast time is 8:30pm Thursday, and 9:00pm Monday and Wednesday. Fans are invited come early, and bring family, friends and their own chairs and blankets and join the City of Clarksville for community rallies to cheer the Predators on to their first Stanley Cup.