APSU Baseball has Four Alumni active in the Minor Leagues

Ryne Harper [1] (2008-11), who was picked up by the Minnesota Twins organization during the offseason, began the year at the Double-A Chattanooga Lookouts. He already has two saves in his first two appearances with the club, striking out all four batters he has faced. 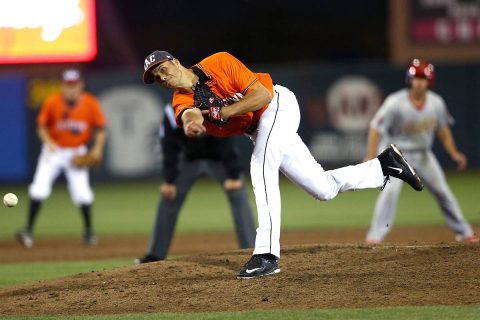 Tyler Rogers [2] (2012-13) begins his fourth season with the Sacramento River Cats, the San Francisco Giants Triple-A affiliate. A Mid-Season All-Star last season in the Pacific Coast League, he has made a pair of middle relief appearances for the River Cats and has not allowed a run in his first three innings of work.

After zooming up the organizational chart last season and being traded during the offseason, Jared Carkuff [3] (2013-16) begins 2018 at Double-A San Antonio Missions – an affiliate of the San Diego Padres. He made his debut April 8 and tossed two scoreless innings of relief.

Ridge Smith [4] (2014-16) begins 2018 where he ended last season, with the Single-A Lansing Lugnuts, an affiliate of the Toronto Blue Jays. He has opened the season with a three-game hit streak, including a home run in his second game of the season.