The Govs enter the matchup versus the Gamecocks with a 24-12 overall record this spring, including an 8-2 mark in OVC play, after dropping a non-conference mid-week game to Middle Tennessee on Wednesday, while Jacksonville State (21-17, 9-1 OVC) has not played since last Sunday. 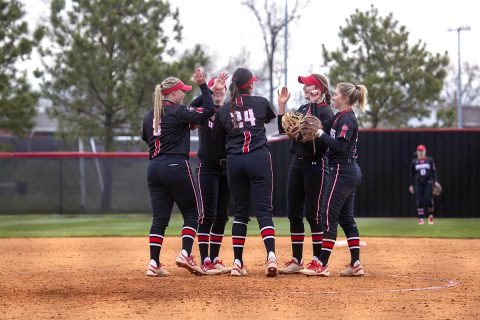 Friday’s doubleheader will be the 40th and 41st games overall in the series between Austin Peay and Jacksonville State, dating back to their first meeting back on March 6th, 1993, with the Govs trailing in the all-time series 29-10.

Leading the Govs offense attack is junior third baseman Danielle Liermann [1], who enters the twinbill hitting at a .417 clip, including a team- and OVC-high 15 home runs and 44 RBIs.

But Liermann hasn’t had to carry the offensive load alone, with four other Govs hitting over the .300-mark so far this season.

In the circle, the Govs have three pitchers that have posted .500-or-better records this spring, led by Rackel’s 12-5 mark, which includes a 1.83 ERA and 125 strikeouts in 111 innings of work. She has also recorded two saves.

Offensively, the Gamecocks are batting .278 as a team this spring with three players batting .316-or-better – led by Taylor Beshears’ .368 batting average. She also leads her team in home runs (6) and RBIs (25).

Austin Peay has lost its last eight meetings with the Gamecocks.

Pitcher Morgan Rackel has only walked two hitters in her last 53.1 innings of work, while striking out 53 hitters over the same period.

Junior outfielder Kacy Acree [5] has reached base in 12 straight games.

11 of the Govs 39 home runs this season have come in leading-off an inning.

The Govs have recorded 10-or-more hits in four of the five games during the current homestand.