Despite the loss, Austin Peay (21-16, 11-7 OVC) won its fifth OVC series and moved into third place in the league standings. 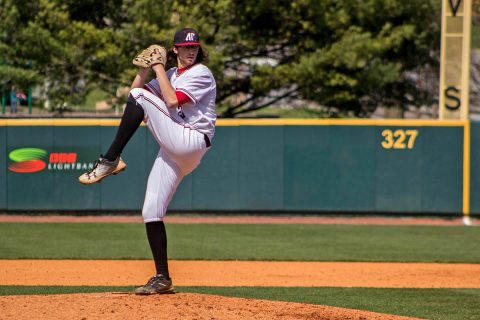 Eastern Kentucky (18-20, 9-6 OVC) took the lead early in the Sunday finale, taking advantage a rare spate of Austin Peay miscues. The Colonels struck for three runs in the first four innings, scoring twice in the first inning without a base hit.

Governors starter Brandon Vial [1] (1-2) battled throughout his outing, pushing through six innings. He recorded just two strikeouts, but used one to end the third inning while leaving two Colonels runners in scoring position. He would allow just four runs (one earned) while scattering six hits.

Austin Peay could not solve Eastern Kentucky starter Austin Perry (4-1), who went five scoreless innings while scattering three hits. However, the Govs had better luck against the Colonels bullpen.

The Govs broke through against the EKU bullpen in the sixth inning with three consecutive batters reaching base safely. Third baseman Malcolm Tipler [2]‘s run-scoring double capped that rally and designated hitter Bobby Head added another run with a sacrifice fly, getting the Govs within a run, 3-2.

Eastern Kentucky responded with three runs in the seventh, rebuilding its lead against the Govs bullpen. However, Austin Peay matched that rally with its own three-run burst in the bottom of the seventh. Shortstop Kyle Wilson [3] drove in a run and first baseman Parker Phillips [4] drove in two runs as the Govs climbed back within a run, 6-5.

The Colonels would tack on a pair of key insurance runs in the ninth. Left fielder Daniel McFarland drove in the game’s final run with a ground out.

Phillips went 2-for-5 with two RBI in the series finale and finished the series with 12 RBI. Wilson and Tipler also had two hits and a RBI each.

Second baseman Daniel Harris had four hits and scored twice to pace the Colonels. Catcher Alex Holderback also went 2-for-4 with a RBI.