Nashville, TN – Austin Peay State University women’s tennis team fought all the way to the end against a conference-unbeaten Eastern Kentucky, but fell just short, 4-3, in the Ohio Valley Conference Championship, Sunday, at the Centennial Sportsplex. 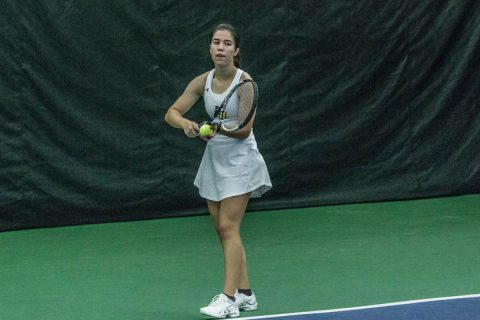 The only remaining match on the court (due to the match being indoor with only four courts because of rain) was at No. 3 singles, where EKU took the first set.

Claudia Yanes Garcia [3] fought back to win the second set after dropping the first at No. 2 singles. A brilliant defensive display of tennis from EKU’s Kristina Lagoda in the third set felled Claudia, and EKU went up 2-0 in the match. Kuppig’s opponent broke her early to lead 4-1 in the second, but Kuppig fought back, eventually tying the set at four.

However, in another twist, EKU broke again and won the second set, 6-4, to force a third set. Schmidt got a massive break up 4-3 in the second and went on to even her match up at one set each.

Lidia responded with a 6-1 second set scoreline to put the Govs on the board. Kuppig turned it on in the third set, breaking her opponent early in the set and holding her service games as she won the third set and the match was suddenly tied again 2-2. Schmidt held her service games twice to stay in the match and forced a tiebreaker to decide the No. 3 singles match. Schmidt pulled away early in the tiebreaker as the Govs went up 3-2.

No. 5 and No. 6 singles were already underway, as EKU won in straight sets at No. 6. Ana Albertson [4] fought back from being down a break early at No. 5 singles to force a tiebreaker, but EKU won the tiebreaker and won the last set to win the title, 4-3.