101st Airborne Division celebrates its 2018 Day of the Eagles

Fort Campbell, KY – For over 75 years the 101st Airborne Division (Air Assault) has celebrated a “Legacy of Heroism,” to honor valiant Soldiers from the past and present.

The 101st Airborne Division hosted the 2018 Day of the Eagles, May 24th, here and presented this division with another opportunity to remember those who have passed and strengthen the bonds of those still here. 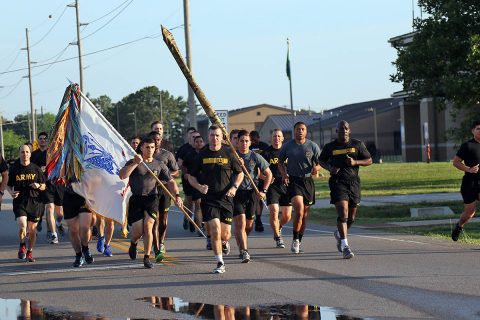 Brig. Gen. Kenneth T. Royar and Command Sgt. Maj. James L. Manning lead soldiers from 101st Airborne Division in a 4 mile division run for Week of the Eagles, May. 24 on Fort Campbell, Ky. Week of the Eagles was a tradition started in 1973 as an effort to reinvigorate the sense of community and is still carried on today to also honor those who served. (Sgt. Sharifa Newton, 40th Public Affairs Detachment)

Leading up to the Day of the Eagles, the division held a golf scramble tournament at Cole Park Commons Golf Course and organized by the 1st Brigade Combat Team, 101st Airborne Division. The tournament split into 24 teams of four, then each person on the team took a tee shot on each hole, but everyone played from the spot of the best shot.

Col. Derek Thomson, commander of 1st Brigade Combat Team, emphasized the division wanted to do something fun prior to the celebration.

On May 24th, Screaming Eagles Families and friends came out for the Division run. The run route was four miles and was supported by the Fort Campbell Fire Department and Emergency Medical Services. 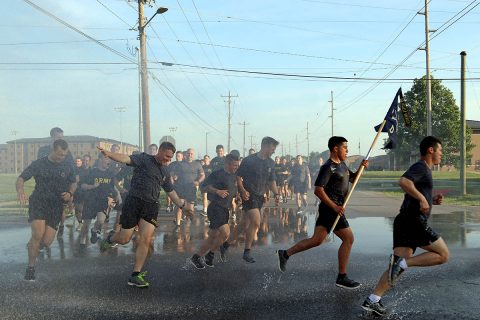 “We’re busier during the Week of the Eagles because we ramp up and provide services to Fort Campbell,” said Ryan Harrell, a Navy veteran and a firefighter with Fort Campbell Fire Department Station 5. “For example, right now we are on the corner of Desert Storm Avenue and 42nd Street providing aerial waterway service. The Soldiers are able to run through a giant water sprinkler, so to say, and be able to cool down in these early summer months.”

Harrell also said that they had roving ambulances and Military Police assisting as well.

Sgt. DeMetry Hardister, a firefighter with 716th Military Police Battalion, 550th Engineer Detachment, also expressed that the Day of the Eagles represents a day to reflect and look back on the history of the 101st, everything that they’ve been through and it gives Soldiers a sense of pride in what they’re standing up for.

Similarly to the fire department and EMS, 101st Airborne Division Air Assault Band also supported the Day of the Eagles.

“A couple missions of ours as bandsmen include providing community and strategic outreach and also promote esprit de corps amongst our troops and Families,” said Staff Sgt. Daniel Aston, a baritonist with the band. “Being out here gives us an opportunity to engage and support Fort Campbell and the families with music to lift their spirits and for the troops, it is an awesome opportunity to provide that motivation while they are out here celebrating our division’s rich tradition and legacy of the 101st.”

The division also held the Best Air Assault Competition that included several events such as a 12 mile road march, a written exam, a buddy run, rappelling, a medical evacuation and trauma lane, obstacle course, and a sling load inspection. And the camaraderie and team building didn’t stop there. 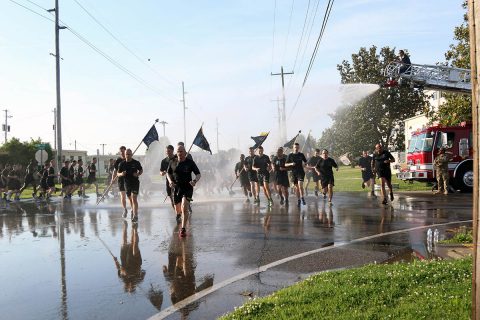 “Today we are supporting Day of the Eagles by conducting a Best Air Assault Competition, which is pulling from across the [brigades] and from across the division, to see exactly who has the best Air Assault team,” said Capt. Matthew Rivas, The Sabalauski Air Assault School Commander. “We’re also conducting a tour, which is basically going to highlight our Air Assault capabilities across the division along with what TSAAS does for the division and kind of give a run-down of those events the Soldiers go through. Giving the community a “peek behind the curtain” to see what goes on here on base. They can see what our Soldiers are doing day in and day out as they come here and execute the mission of being a 101st Soldier.”

Part of Day of the Eagles also included an open house tour of TSAAS. In attendance were veterans, Families, community members and the Hickman County High School Junior Reserve Officer Training Corps out of Centerville, Tennessee. attended the TSAAS tour. Those in attendance received an overview of what a student goes through when they attend the school, a hands-on static display of two UH-60 Black Hawk helicopters, a demonstration on different rappelling techniques and a walk through the obstacle course.

“This is my first time visiting Fort Campbell, but I belong to the [101st Airborne Division] Association,” said former U.S. Army Staff Sgt. Dave Kelly. “My favorite part of this [TSASS] tour has been the hands-on portion with the helicopters. I was an Airborne trooper and I most definitely wish I had the opportunity to do Air Assault.”

Amongst the crowd was a retired colonel and former Screaming Eagle, who went through Air Assault School in 1987.

“I am here today to see how Air Assault school has changed, I went through in ’87, back then we used more chains than slings,” said Col. (Ret.) Dana N. Hampton. “I am sure the physical piece has changed, but the mental is still just as tough. Every field problem we did had something, we were always starting with an Air Assault then marching back in.”

In addition to those events, Fort Campbell’s Don F. Pratt Memorial Museum had its official open house since its reopening in April 2018 to allow the Soldiers, new comers and veterans of Fort Campbell to reflect on the 101st’s history. 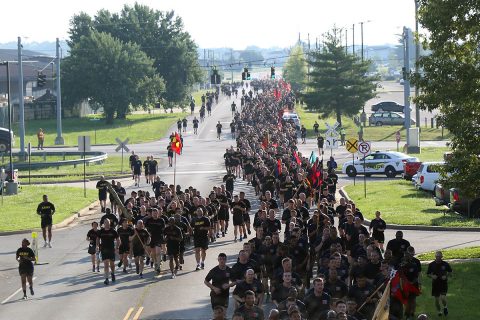 “We are excited to be able to host people here at the Pratt Museum,” said 1st Lt. Daniel Herbster, the division historian. “We’re glad to showcase the museum and its existence, to record and promote the history, heritage and values of the 101st Airborne Division. I am glad, especially on this day when veterans and new Soldiers joining the 101st and their family members come out to learn and appreciate the history of our unit.”

Visitors of the Pratt Museum got to see a wide variety of different exhibits that harness the 101st history to include, a recruiter’s Jeep from the 1970’s, a fully restored CG-4A Cargo Glider plane which carried Soldiers into battle during World War II, displays of captured enemies and equipment from Vietnam, and an illuminated Dutch Manuscript recognizing the Divisions role in liberating Holland in WWII. These are only a few of the many exhibits found in Fort Campbell’s Don F. Pratt Museum.

To bring the Day of the Eagles to a close, the division held the Honor Eagle Ceremony at McAuliffe Hall where they not only paid respects to the fallen, but recognized the winning Soldiers in the Best Air Assault Competition.

“You may ask yourself why are we applauding or celebrating Soldiers, on a day like today, on this solemn occasion of remembering those of the past,” said Brig. Gen Todd Royar, acting senior commander of the 101st Airborne Division. “It’s a fair question and one that should rightly be answered… so I submit to you that there is a second purpose behind today. It’s not just to memorialize those who have gone before us, but it is also to honor them and what better way to honor them then to make sure that we have upheld the standards that they have so rightfully given us.”

In attendance of the Honor Eagle ceremony was Sheila Patton a Gold Star family member.

“I think this event is bittersweet because of course we have a loved one that we’ve lost, but at the same time they’re (the division) honoring them,” said Patton. “It’s hard to be sad when there’s so many people coming out to remember all of those who have sacrificed.”

She expressed her gratitude and said that Fort Campbell does a phenomenal job of taking care of the families and survivors of the fallen. Also, that the care that Fort Campbell shows her makes her feel as she needs to give back, so she supports a numerous amount of events.

A community supporting a community.