Nashville, TN – Anthony Garcia drilled a grand slam and the Nashville Sounds routed the Tacoma Rainiers, 11-3, in front of a sellout crowd of 10,022 fans at First Tennessee Park Friday night.

Garcia’s blast came as part of a six-run second inning for the Sounds. Entering the bottom of the inning, the Sounds trailed 1-0 but quickly turned it around. With one out, Sheldon Neuse singled and BJ Boyd doubled to even the game at 1-1.

Tacoma starter Ross Detwiler issued three consecutive walks to force in another run to give Nashville a 2-1 lead. 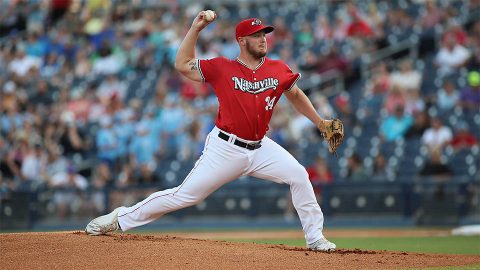 Garcia followed the bases loaded walk to Jake Smolinski by launching a 1-2 pitch from Detwiler onto the berm in left field for a grand slam and 6-1 lead. It was the first grand slam by a Nashville hitter in 2018.

J.B. Wendelken made a spot start for Chris Bassitt and pitched three effective innings. The right-hander allowed one run on three hits and racked up seven strikeouts in his three frames.

Wendelken handed the game over to Dean Kiekhefer who followed with three shutout innings. Jake Sanchez worked a pair of scoreless innings before Jeremy Bleich pitched the ninth.

Garcia finished 2-for-5 with 5 RBI and BJ Boyd chipped in with a multi-hit game. Nashville hitters walked a season-high 12 times.

Tonight’s attendance of 10,022 at First Tennessee Park marked the seventh sellout of the season and 62nd in ballpark history.

Nashville is now 61-41 against the Pacific Conference since 2015.

Anthony Garcia became the first Sounds player to hit a grand slam this year when he launched one in the second inning.