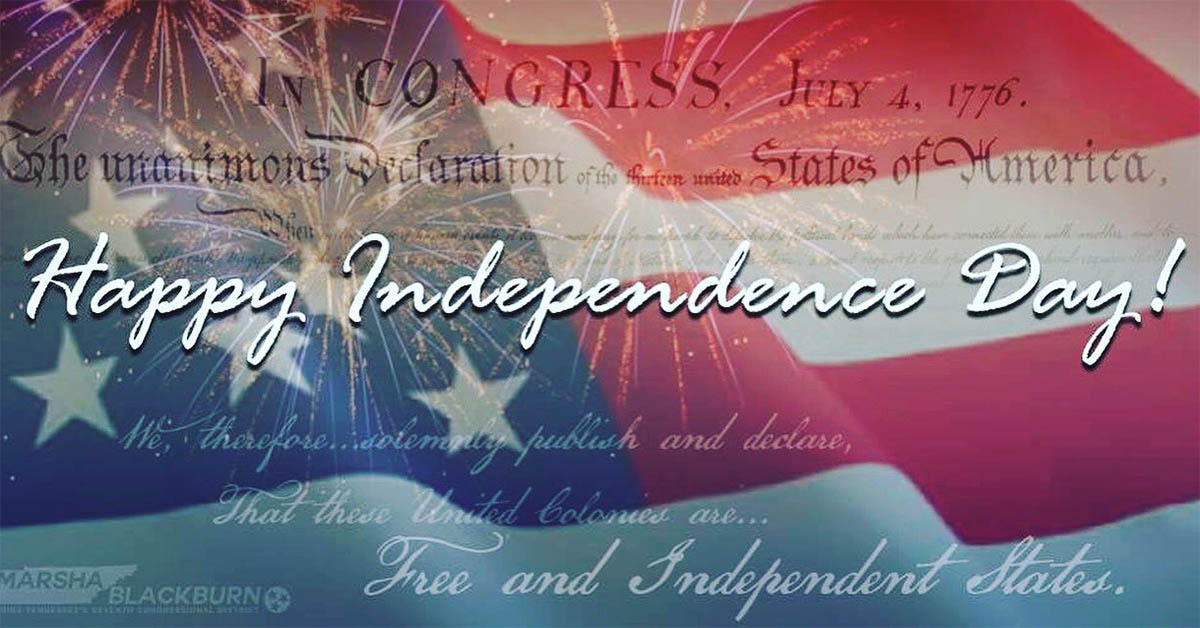 Washington, D.C. – This week, Americans from all walks of life gathered across the nation to celebrate our country and its Independence. Just 242 years ago, patriots throughout America’s thirteen original colonies convened at the Second Continental Congress and declared our country’s independence from Great Britain.

This unprecedented acknowledgment of our God-given rights through the Declaration of Independence laid the foundation for the great nation we inhabit today; one that guarantees one’s right to life, liberty, and the pursuit of happiness. 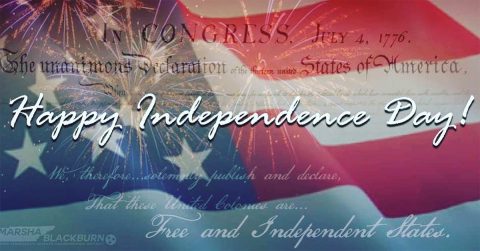 The Fourth of July serves not only as a reminder of our nation’s past, but also our country’s values and institutions.

While we may have disagreements, Americans should be unified by these values which originally made America great; such as individual liberty, democracy, free enterprise, and the right to determine one’s own destiny.

Now more than ever, we are reminded of how precious these rights are that were endowed to us by our forefathers. Demonstrations of censorship by those trying to insert their political agendas on patriotic Americans will not be tolerated. It was concerning earlier this week, when Facebook deemed a posting of the Declaration of Independence as “hate speech.”

Let me be clear: this document – the foundation our democracy – is not hate speech, nor is standing for the American flag. The Declaration of Independence, the Constitution, the Star-Spangled Banner, and the American flag are all remarkable symbols of American opportunity and freedom. Those that choose to celebrate and commemorate these symbols through free expression of speech should not be censored.

I will continue to work in Congress to hold companies like Facebook and others in Silicon Valley accountable for censoring conservative or patriotic speech.

Independence Day also serves as a special day of appreciation for the men & women of our military who have sacrificed so much to defend our freedom and the land we call home. We especially want to thank our veterans, who have served our country so honorably. They deserve the best care possible, and I am grateful that last month Congress passed – and the President signed into law – the VA MISSION Act, which was championed by my good friend and fellow Tennessee Congressman, Dr. Phil Roe.

This bill provides important funding for the Veterans Choice Program, which gives our veterans greater access to private health care if they are not able to receive timely care at a VA facility. It also streamlines the VA department’s duplicative community care programs, creates a non-partisan process for reviewing the VA’s assets to ensure veterans can access the care they have earned, and expands the Department of Veterans Affairs’ Post-9/11 Caregiver Program to all eras.

These much-needed bipartisan reforms will put the department back on track so that we can fulfill our promise to the brave men and women who served this country, and who deserve a VA that works for them.

I look forward to returning to Washington, D.C. next week to continuing fighting for Tennesseans, our military and veterans, and the principles upon which our great nation was founded. I hope everyone had a wonderful Independence Day and enjoyed spending time with family and friends. God Bless America!

Thursday, the National Park Service announced that it is awarding a grant worth $637,500 to help buy and preserve part of a Civil War battlefield in Franklin, Tennessee that has been threatened by development. This grant from the American Battlefield Protection Program will help protect a portion of the Battle of Franklin, which was fought in the southern portion of the city on November 30th, 1864, and was the site of one of the most fiercest battles and dramatic charges of the Civil War.

More than 10,000 soldiers in both the Union and Confederate armies died during this battle that changed the outlook and led to the eventual downfall of the Confederacy and end of the Civil War.

Today, over a hundred acres of battlefield land have been reclaimed and preserved by organizations such as Franklin’s Charge, the Heritage Foundation of Williamson County, the Battle of Franklin Trust, and Save the Franklin Battlefield. It’s encouraging to see that the National Park Service and the Department of Interior recognize the incredible historical legacy of this battlefield.

I have been working for many years to preserve and expand some of Tennessee’s great battlefields, such as the Shiloh National Military Park, and was honored to receive the Civil War Trust’s National Leadership Award last year for my advocacy for these communities. It is so important that we continue to work to protect the historical legacy of our state so that visitors and future generations can gain a better understanding and appreciation of the history of our great state and country.

It was another great month for our economy! The U.S. economy added 213,000 jobs in June — a higher-than-expected number as more Americans who had previously given up looking for employment are now getting back to work. More than 600,000 people joined the workforce last month, and the number of new businesses in Tennessee grew by more than 10 percent during the first quarter of 2018.

More than four million hardworking Americans are seeing bonuses, pay raises, and new investments in their workplaces; GDP forecasts are up, and manufacturing and small business confidence are at an all time high. Tennesseans and folks across the country are seeing the the benefits of pro-growth, low tax, and less regulation policies.

I have always said that lower taxes + less regulation is a winning formula, and I will continue to work with President Donald J. Trump and in Congress to ensure that our economy and job market remains strong. Tax cuts work!