Clarksville, TN – Austin Peay State University announced today that it has reached a record fundraising total of $9.85 million in gifts and pledges for the 2018 fiscal year.

This total is the second-highest in university history, and it is the result of a continuous increase in donations over time. 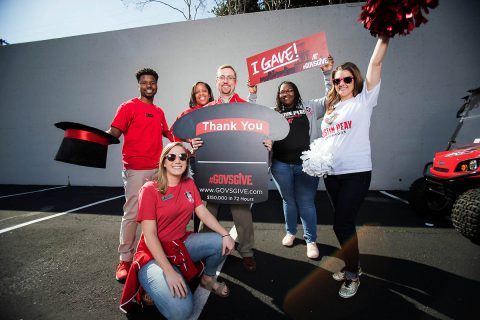 More than 3,500 individuals and organizations gave to various APSU programs throughout the year. One area of high performance was athletics, which collected $3.7 million of the overall amount.

“Our vision for the future of Austin Peay would not be possible without the generosity of alumni, friends and the campus community,” Alisa White, APSU president, said. “It has been an exciting year for this university, and donor support allows us to continue our commitment to student success.”

Several outstanding initiatives contributed to the recent surge in fundraising. GovsGive, the University’s 72-hour online giving campaign, surpassed its goal for the second-consecutive year, collecting $172,208 for various colleges’ Funds of Excellence, as well as athletics and student affairs.

The total impact of GovsGive is now $325,000 raised and 250 new donors recruited in just two years. Newly created funds included the Southeastern Grasslands Initiatives Fund that will benefit the Austin Peay Center of Excellence for Field Biology students, and the Victory Fund, which was established to support and retain athletics coaching staff following the most successful APSU football season in 40 years.

Numerous endowments were instituted throughout the year, such as the John W. Moseley Communication Scholarship Endowment created to honor the late communications professor, who served as an APSU faculty member for 18 years. The John A. and Elizabeth A. Wyatt Endowed Scholarship was formed to offer aid specifically to upperclassmen students, while the Brock Blick Endowed Scholarship in Agriculture was established by two local parents to celebrate the memory of their 11-year-old son.

The Brock Blick Fund of Excellence and the naming of the Brock Blick Animal Science Facility were also completed over the course of the year. Located on the APSU Farm, the state-of-the-art, $1 million facility opened in 2016 with classrooms, labs and designated areas for agriculture activities.

Other campus building updates included the opening of the Larry Carroll Trading Center in the Kimbrough Building and the highly anticipated ribbon cutting of the $21.3 million, 46,000-square-foot Art + Design Building for the visual arts, which includes a dedicated donor wall and six rooms named after prominent donors.

To establish an endowment or support other fundraising initiatives, contact the Office of University Advancement at 931.221.7127.