Des Moines, IA -The Nashville Sounds pushed their winning streak to five games with an 8-3 win over the Iowa Cubs in game one of a doubleheader Friday afternoon at Principal Park.

Ramon Laureano led the charge offensively with a 3-for-5 day at the plate as the Sounds collected six extra-base hits. Laureano sparked a rally immediately when he lined a base hit down the right field line to start the game. The base knock extended his hitting streak to 11 games.

Franklin Barreto walked to put a pair of runners on base for Anthony Garcia who hit a deep drive into right field. 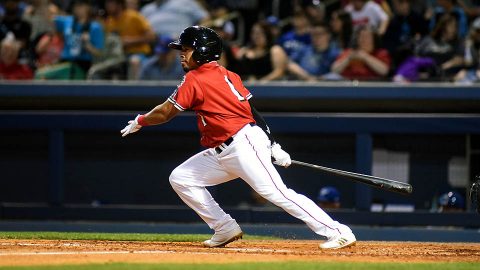 The ball was juggled and dropped by Iowa’s Bijan Rademacher. The RBI double plated Laureano and an added miscue by the right fielder allowed Barreto to score and make it 2-0.

In addition to Laureano’s three hits, Beau Taylor went 2-for-4 with a pair of RBI and Melvin Mercedes went 2-for-3 with a triple, double, walk and two runs scored. Nashville took advantage of 10 hits and four walks by going 5-for-13 with runners in scoring position.

Five of Nashville’s eight runs were scored with two outs.

Right fielder Ramon Laureano extended his hitting streak to 11 games with a single in the first inning.

Dean Kiekhefer started for the third time in his career (371 games) and threw a career-high 65 pitches. Prior to today, Kiekhefer’s last start was with Triple-A Memphis on July 5th, 2015.